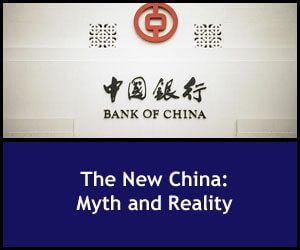 China’s role as a major player ion the world stage continues to grow – but that role isn’t always understood by Westerners, who all too often operate from outdated myths about Chinese culture and politics. On a recent Flash Back Friday episode of the Creating Wealth Show, guest Shaun Rein talks with host Jason Hartman about the realities of the “New China” and what they mean for world finance and investment.

At the beginning of every Flash Back Friday episode, Jason reminds listeners that the material being presented isn’t current – it’s culled from the creating Wealth Show archives. But although Jason’s conversation with Rein isn’t exactly new, the topic is as relevant today as it was then.

China’s position on the world stage is solid. Chinese money dominates foreign investment in many areas around the world, including the US. China is a major buyer of the world’s gold supply and its currencies are among the top world currencies being traded on international exchanges. Wealthy Chinese continue to move their money into foreign accounts for security purposes – and the Chinese government’s recent New Silk Road initiative promises to expand China’s presence in Indonesia and build new ties with Europe for years to come.

Based in Shanghai, Shaun Rein is managing director of the China Market Research Group. He’s the author of “The End of Cheap China,” a book that he says, aims to bust some of the persistent myths about China that Westerners hold – myths that undermine efforts to take advantage of China’s new stature in global finance and investing.

The stereotype of cheap Chinese products may persist in the US and other countries, where these goods really are sold more cheaply than domestically produced ones. But government structure notwithstanding, China is, according to Rein, am expensive country to do business in.

As Rain puts it, China is “capitalism on steroids.” Everyone wants to make money, and the government is working to create a true middle class there, capable of sustaining a more consumer-oriented economy.

That means prices are going up, and so is the cost of labor. The job market is changing, too, as manufacturing declines in favor of a more service-oriented economy. There are more Chinese who are truly wealthy than in previous generations – and they’re looking outside the country for places to stash money and start new ventures, too, so the entire economic landscape in the country is undergoing a major change.

The subservient Chinese wife is an old stereotype in Western minds, but Rein observes that in the new China, women are often the breadwinners, with access to more jobs in service and clerical fields than ever before. They’re outstripping men, who all too often have only labor and manufacturing jobs to fall back on. And in a changing economy where manufacturing is taking a back seat to information and service jobs, wives in urban areas may be earning more than their husbands.

One reality of Chinese life that isn’t a myth at all is widespread concern about the safety of the food supply. Massive recalls and reports of widespread illness due to toxic ingredients like melamine and arsenic in foods ranging form baby formula to exported items like pet food makes everyone in China worried about getting sick.

Draconian measures such as shutting down shoddy producers and even executing their executive officers may be turning things around, but Rein says that for many, foreign eateries like US based KFC (once better known as Kentucky Fried Chicken) are seen as the safer choice, thanks to their imported ingredients and higher standards.

Should the West Fear China?

China’s perceived military might is widely seen as a threat in the US, which blames China for a variety of economic ills, including the myth that China is “stealing American jobs.”

Rain points out that although China is a clear competitor in the worlds of finance, industry and investing, militarily the country isn’t actually a threat. China’s much publicized spending on its military is dedicated largely to upgrading – and as China’s financial reach expands it’s not seeking confrontation with countries that could jeopardize its new successes.

Still, Rein says, US mistrust of China and the relentless scapegoating of China for American economic troubles could have a backlash, and hostilities could escalate. But, he points out, many Chinese take a positive view of the US, and are actively seeking to educate their children in American schools and invest their money in US assets such as real estate.

Rain’s book, “The End of Cheap China,” is subtitled “What It Means for the Rest of the World.” AS the myth of the ‘cheap China’ fades, taking with it other cherished Western myths about that vast country, the reality of the New China remains – and Rein’s book also offers ways for investors to capitalize on the new opportunities offered by China’s growth.

Editorial
To close outthe segment, Jason’s regular editorial segment tackles the need for better statistics for tracking the health of various markets and the benefits of self managing rental properties.

“All real estate is local,” Jason frequently says, and because that’s true, it’s important to have better ways to track trends in specific markets around the country –not just in terms of geography, but also n terms of price segments as a way to track changes within a given market as well as national trends.

Although self managing your investment properties sounds like a lot of work, Jason says it’s actually quite easy – and can save a lot in property management fees and other expenses.

If you have a good manager, keep them, he says – but if not, don’t be afraid to take on the management of your properties yourself. Citing a recent situation with a tenant that was resolved easily via email, he points out that in many cases a tenant can be a property manager – willing to take on duties like reporting and handling repairs.

And, as Jason says, rising rents along with a population that just isn’t; buying homes means virtually unprecedented opportunity for investors willing to serve that new population of renters. It’s a win for both sides. (Featurd image:Flickr/epSos.de)

CW 543 FBF: Rapidly Rising Costs of Doing Business in China with Shaun Rein, Author of “The End of Cheap China”