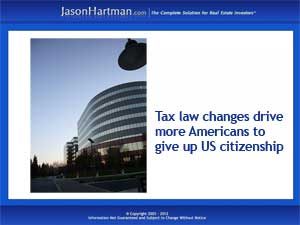 In the first half of 2013, about 1800 people opted to give up US citizenship. In the second half to date, another 1100 or so have turned in their passports. In view of the country’s overall population, that doesn’t seem like much. But compare those numbers to the 932 recorded for all of 2012 and the trend is clear.

The reason for the exodus? While the causes are as varied as the ex-citizens themselves, a new CNN Money report notes that many of this new group cite changes in US tax laws targeting tax evasion and reporting foreign-held assets. That, say some expatriates, creates a time consuming and costly burden that can be avoided simply by living abroad as a citizen of another country.

The tax code is constantly changing, and the latest version involves the Foreign Account Tax Compliance Act, a new law that requires foreign fanatical institutions to report all assets owned by Americans, regardless of where they live. That means that whether you’re an American living abroad with assets in the banks of your country of residence, or you live in the US but have foreign holdings, those assets will be taxed.

The law doesn’t just target large asset holders and the wealthy who maintain residences around the globe, either. The new Act applies equally to large companies and retirees with meager assets. And the expense and effort of filing tax documents for two countries can often create a headache that simply giving up citizenship –while keeping the assets – can avoid.

Giving up citizenship doesn’t solve everyone’s tax problem, though. It won’t help tax evaders, who can still be prosecuted for back taxes regardless of where they live. And for those holding over $2 million dollars in assets, the government levies a large exit fee.

Surrendering citizenship isn’t an easy decision, and for many the idea brings up a range of conflicting emotions. In most cases it’s an irrevocable choice. But the number of American expatriates – with or without US citizenship—continues to grow, as retirees and others take advantage of cheaper living in countries such as Ecuador and Costa Rica.

This expatriate community consists of people willing to keep social and cultural ties with home, while putting down permanent or semi-permanent roots in their new country. And that means a growing interest in investing in property and other aspects of life outside the US – as the ever changing tax codes create more “citizens of the world” and open up new opportunities for building wealth through income property investment abroad –a strategy Jason Hartman recommends.   (Top image:Flickr/EduardoP)

Jason Hartman is the complete solution for real estate investing. read more from our archives: