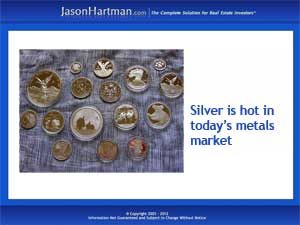 The gold standard may be giving way to the white standard. As gold prices bounce up and down, mostly down, it’s the white metals – silver, platinum, palladium and, to a lesser extent, aluminum and tin that continue to quietly make gains in the market. And since recent investing reports have linked trends in these precious metals to economic indicators such as job growth and the Federal Reserve’s stimulus taper-down, the movement of metals is worth an investor’s attention.

Gold prices rose in August 2013 to over $1400 an ounce, up $200 from the previous quarter. But uncertainty about the future of gold still persists. On the other hand, the lowly silver, which trades at rates far less than gold does, surged in price by 29 percent in the same time frame. Compared to gold, silver isn’t worth much. Even with the current upswing in silver prices, it’s trading at around $60 an ounce. But unlike gold, which has a relatively limited application outside its investing value, silver is in wide demand in the retail and industrial sectors.

According to a recent report from the finance site Money Morning, the demand for silver coins is one reason for the upsurge in silver prices. For example, the US Mint revealed that at this point in 2013 demand for the American Eagle silver dollar has already outstripped totals for the whole of 2012.

Foreign interest in silver is also driving demand, especially in India and China. The Indian government raised the tariffs on imports of gold, but not silver, so imports of silver in 2013 have already doubled last year’s total. In China, too, interest in silver is growing, boosted by the country’s boom in industrial development. China is now the world’s second largest silver consumer, and Chinese investors are also pushing the demand.

The other white metals are also making gains, mainly in industrial applications. Platinum and palladium, used worldwide in a variety of heavy industries as well as more glamorous ones like jewelry making, rose in price along with an upswing in other economic indicators such as job growth and industrial output. And even the lowly aluminum and tin, which remain staples of the industrial metals market, continue to trade at relatively steady rates.

The behavior of he precious metals market may seem far removed from real estate. But the movement of the metals reflects the health of other economic factors worth watching. And for now, all that glitters may actually be – silver.  (Top image: Flickr/MauroPaoli)

Join Jason Hartman and his team of investing experts for the Austin Executive Property Tour, a one day investing event in Austin, TX on September 28, 2013. Tour Austin properties, meet with local property professionals and get a free bonus. For details, click here.