Dodd-Frank Act Caves on Down Payments 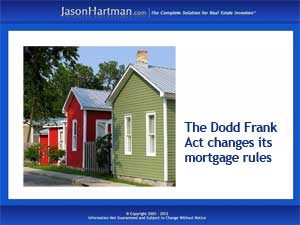 It’s been three years since the Dodd Frank Act became law, but the legislation – intended to head off another crisis in mortgage backed securities – is still evolving, as bank regulators and lawmakers try to shape the Act’s broad provisions into specific rules and regulations. Because of that, a key provision of Dodd Frank has been all but nullified, thanks to intense pressure from lobbyists representing the interests of the housing market.

The Dodd Frank Act (full name: the Dodd Frank Wall Street Reform and Consumer Protection Act) took effect in July 2010 in response to the massive housing crash of 2008. As the name implies, the Act holds Wall Street entities accountable for packaging and selling large amounts of securities backed by highly questionable mortgages, created in a freewheeling housing market that in many cases required no documents, and no down payments at all.

Because the big banks managed to avoid the risk of these loans by passing them off to investors, one of the Act’s main intents was to introduce a requirement to force lenders to assume the risks of less than optimal loans. Thus the concept of the “qualified mortgage” – a loan product with a set of specific criteria aimed at screening out iffy applicants at a higher risk of defaulting. Banks could still make risky loans if they chose, the plan went, but they’d only be spared risking their own capital – and the threat of legal action – by offering the “qualified” loans.

But among the Qualified Mortgage Rule’s provisions was the requirement that applicants produce a 20 percent down payment – a rule with the potential to lock out large numbers of potential borrowers and reduce the number of home sales in markets across the country.

Enter the lobbyists – a diverse group that included real estate professionals, who wanted to make more home sales, housing advocates, who wanted home purchases to be more accessible to low income buyers, and many others in between. They exerted enough pressure to force Dodd Frank regulators to revise the QM Rule so that it requires no down payment whatsoever.

That was a victory for those who wanted to see more houses sold, although it eliminated one of the key protections for both consumers and lenders in the Act. But Dodd Frank still kept many other pieces of the Qualified Mortgage Rule, such as setting a 45 percent debt to income ratio and discouraging the sale of interest only and other risky loan types.

The actual impact of the nonpayment rule change may be minimal since government, not private, loan products dominate the housing market now. But even so, as a recent Washington Post piece points out, the whole thing points up the power of housing lobbyists to shape the landscape of private mortgage lending – with implications not just for residential borrowers but also for investors following Jason Hartman’s guidelines on financing income properties for wealth building.  (Top image: Flickr/byrdiegyrrl)

Can Too Much Information Derail Investing Success?

7 Quotes to Invest By