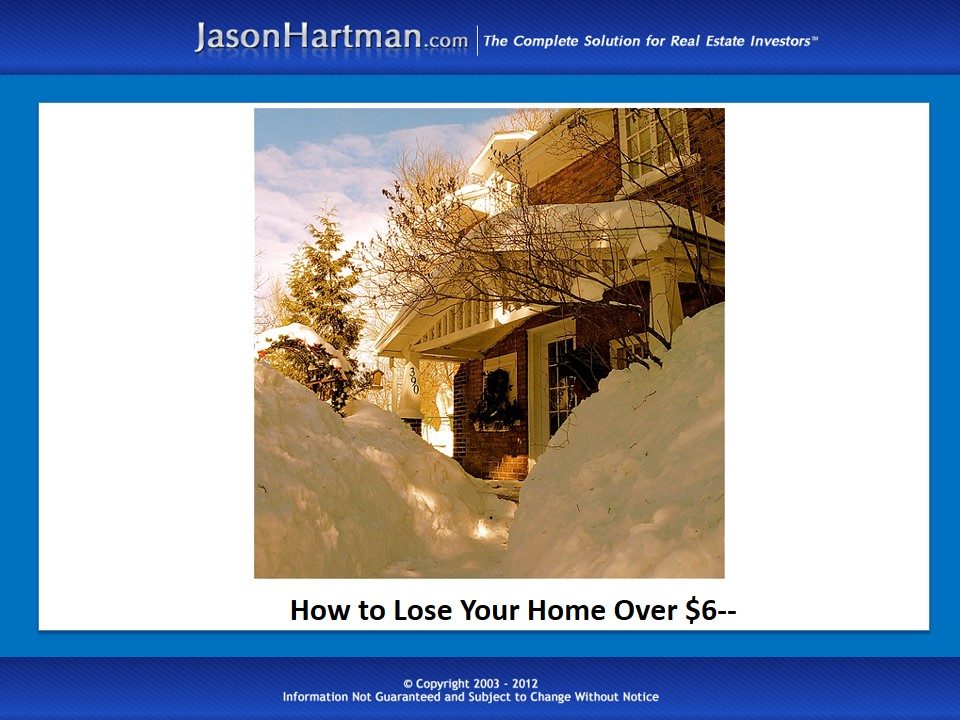 Unfortunately, we aren’t joking—and stories like this seem to be appearing more and more. Here are the details—Pennsylvania woman Eileen Battisti lost her home in September of 2011 after she incurred a $6.30 late fee from an interest rate charge on her 2009 tax bill.. To cover the debt, the $280,000 house was sold for $116,000, a move that Battisti protested as unfair—Jason Hartman agrees.

Beaver County auctioned off the house before Battisti could pay the fee, which she asserts she didn’t even know she owed. It seems crazy, and that’s because it is. But the judge maintains that he isn’t doing it out of spite, but compliance with the law. He’s declined to reverse the decision, and Battisti is left fighting for what is rightfully hers.

The first time she was informed that her home was being sold was the first time she knew about the fee, and it was too late. Beaver County court denied evidentiary hearings, and then the Commonwealth Court in Harrisburg (in August 2013) reviewed the case, only to rule against Battisti. As consolation, Judge C. Gus Kwidis said that the homeowner will receive $108,039.

But she’s going to lose her home, the last place her husband lived, the place where she raised her children and was saving money for their college education. Of course, the buyer of the home has offered to sell Battisti her own house back—for $260,000.

Representatives from the county maintain that they’re sad to see it end this way, but tax sale law and tax real estate law don’t allow for anything else to happen.

So, while poor Battisti and her three children await a plethora of upcoming legal proceedings, they’ll be able to live in the house that she’s continued to pay taxes on during the legal process. A widow raising three children on her own will then lose her home because her husband managed the finances and she missed a $6 fine, though everyone involved in the case “feels bad”—little consolation, if you ask us. (photo credit: Denis Collette…!!! via photopin cc)

* Read more from JasonHartman.com
Get Free Money Out of Your Investment
Getting Out of This Financial Mess