Why So Few New Mortgages? 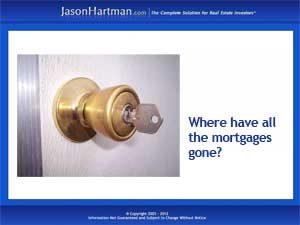 Where have all the home buyers gone?

Interest rates for typical mortgages are hovering around 4 percent – but potential homebuyers aren’t biting. Overall, applications for both refinancing and home mortgages are down by 48 percent this year, according to a new CNBC report – and market watchers are wondering what that could mean for the health of the housing industry.

The Federal Reserve has now “tapered down’ its massive Qualitative Easing stimulus program for the third time, and more scalebacks are likely, depending on the health of economic indicators such as employment and retail activity. Because of that, financial experts worried that interest rates would shoot up, controlled only by natural market factors.

So far, that hasn’t happened. But along with those relatively low interest rates came more stringent mortgage standards – part of the Qualified Mortgage Rule that took effect in January 2014. And we can also add in rising home prices as the housing market continues to recover from the historic crash of 2008, as possible reasons for the slump.

Houses are still being bought and sold, but a growing number of those sales are skirting the mortgage market entirely and relying on all cash, especially in higher end markets – a strategy that shuts out many lower-end home buyers and investors.

For buyers who don’t have cash, the issue of creditworthiness stands as the major obstacle to taking out a mortgage. The Qualified Mortgage Rule sets minimum standards for qualifying loans – but even so, many borrowers don’t meet those standards.

To ease the credit roadblocks, many lenders are now setting their own minimal credit requirements, with acceptable scores lower than those set a year ago. And the Federal Housing Finance Agency, regulator for quasi-government mortgage servicers Fannie Mae and Freddie Mac, has opted to create new lending standards along with a new program that would reduce insurance premiums for riskier borrowers who agree to go to credit counseling.

But some housing industry professionals argue that those measures aren’t enough – and they might just put more unqualified borrowers back into the housing market at a time when both the availability and price of properties make put home buying within reach of more borrowers.

“The Future Ain’t What It Used To Be”: Yogi Berra