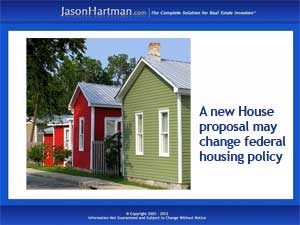 Government help for housing may be coming to an end, if a new bill floated by House Republicans becomes law. This wide-ranging piece of legislation could virtually eliminate a number of government-backed housing initiatives, privatize federal lending services and make things tougher for struggling homeowners. While it’s clear that the hosing financing system needs work, some industry watchers fear this proposed bill could put the housing recovery on shaky ground.

According to a new report from Mortgage News Daily, the proposed legislation, sponsored by members of the House Financial Services Committee, would completely phase out government backed lenders Fannie Mae and Freddie Mac, and replace the with a nonprofit securities package. That plan would override current plans to create a third entity out of parts of Fannie and Freddie to handle securities and bonds.

Other provisions in the bill, which is now only in draft form, include planes to pare down the government’s direct involvement in housing finance to loaning only through the Federal Housing Administration (FHA). What’s more, the new plan, which claims to benefit first time and lower income home buyers, would raise the minimum down payment for an FHA loan to 5 percent of a home’s total purchase price.

The housing bill’s sponsors, led by Texas Republican Jeb henserling, who chairs the Finance; Services Committee, call it a “holistic” approach to housing finance that would keep support programs from losing money and break what they see as a virtual federal monopoly on housing support. They cite the troubled history of Fannie Mae and Freddie Mac, which nearly collapsed after the housing crisis of 2008, and losses racked up by the FHA as reasons for revamping the whole system.

Critics fear that by raising the minimum down payment required for FHA loans and eliminating some if not all of the government backed financing and refinancing programs, the bill could shut out some potential home buyers and slow down the housing recovery. And, because it also delays implementation of the Qualified Mortgage Rule, which sets fairly stringent standards for mortgage applicants, it could allow more risky loans to slip through.

This housing finance package is still in its infancy, and it’s too early to speculated on its chances for success. But for property investors following Jason Hartman’s principles for building wealth in real estate, the result could be tighter mortgage lending standards and new requirements for down payments and other costs associated with a real estate purchase – a holistic approach that affects anybody who’s planning to purchase property. (Top image: Flickr/WindRose)

Know When to Hold ‘Em for Profit in Real Estate