Know When to Hold ‘em For Profits in Real Estate 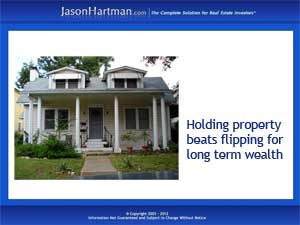 “You got to know when to hold ‘em, know when to fold ;em,” sang Kenny Rogers in the hit song “The Gambler.” That’s good advice in real estate as well as in poker. And in real estate, as Jason Hartman says, it’s the best advice most of the time. House flipping doesn’t build long-term wealth, as a family of “professional” flippers recently found out.

A May 2013 story in San Antonio’s online newsmagazine mySan Antonio reports the saga of David and Melina Montelongo, stars of the A&E reality show “Flip This House.” After a much-publicized career spent buying, renovating and quickly selling houses, the family finds itself bankrupt and living in a rental house, their flipping empire in tatters.

Flipping houses looks like a fast way to make money in a hot real estate market. The practice itself is legitimate, although some of the tactics involved are not. What typically happens is this: a speculator, or flipper, buys a property, often a fixer upper, and often with cash, does a few fast renovations and rushes it onto the market again. A quick sale later, and the flipper has the money to buy another house, repeating the process as often as they choose.

But flipping has its problems. The profits don’t last, and some will vanish into transaction fees and renovation expenses. Because flippers don’t hold onto the properties they buy for very long, there’s no chance to accrue equity or even to reap long-term profits from rental income. And as the flipper does transaction after transaction, the profit margin can shrink.

The Montelongo family’s fortunes sank in financial infighting and rough conditions in the housing market. But their troubles put a very public face on the practice of house flipping – and they show why, for long term financial gain, knowing when to hold ’em, preferably with a long term fixed mortgage, offers a better chance for building wealth that lasts.  (Top image:Flickr/argyll)

The Myth of the 20 Percent Down