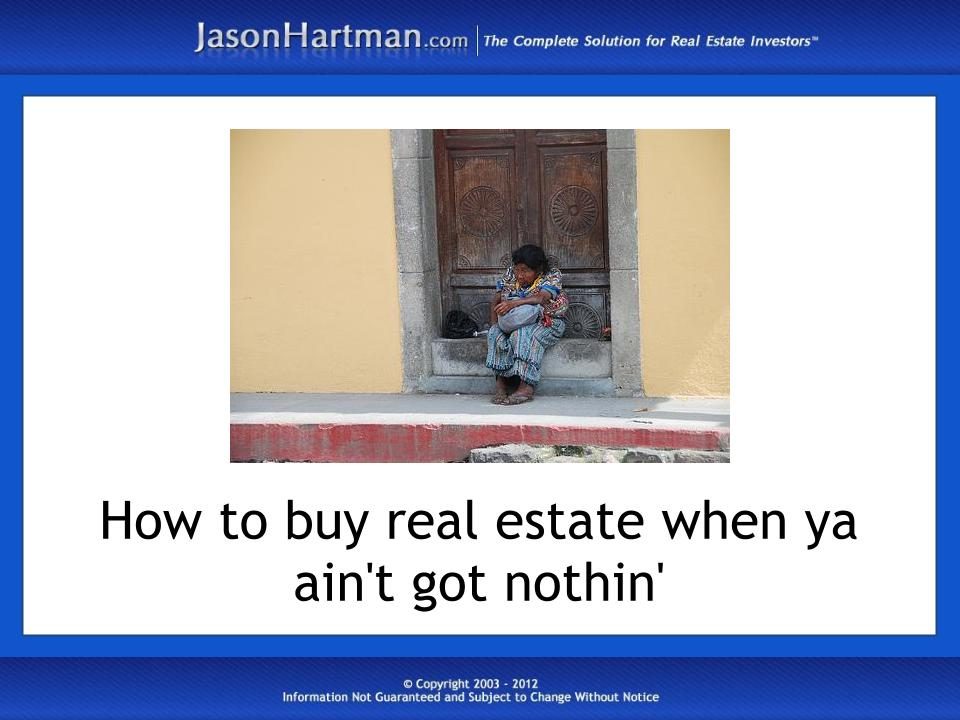 Everybody knows that a headline’s job is to get you to read the rest of the article, right? So we hope you’re not too offended if we backtrack slightly and say that, in reality, if you truly are dead broke then real estate investing might not ought to be your primary concern. Let’s worry about a roof over your head, food on the table, and an emergency fund first. But after that, the sky’s the limit, even if you have, say, only $2,000.

One of the most common laments we hear from people who would like to get into income property investing is, “I just don’t have enough money for the down payment.” That’s a legitimate concern, one based in reality for a great number of young investors. In recent years, lending institutions’ have normally asked anywhere from 20 to 25 percent of a property’s purchase price to be put down in cash. For even a modest-priced property, that can be a chunk of sweet moolah.

So…what is a budding young investor to do if he only has two grand in his or her pocket?

Here’s an idea Jason Hartman suggests – find a desperate seller to finance the deal! This doesn’t mean you should begin hanging around the rear entrances of local courthouses in hopes of striking an agreement with people like Aaron Hernandez, ex-NFL player and present murder suspect. While people like him might find themselves in a hurry to dump real estate quickly in order to fund a flight from justice, we don’t suggest you turn to those who are THAT desperate.

The reality is that some life events cause a person to want to sell a house and move quickly. Maybe it’s a new job, a new spouse, a sudden urge to join a cult. Or maybe they just don’t feel like waiting for the traditional lending process to play itself out. The truth is, people get in a hurry. Nothing wrong with that, and you could be the lucky beneficiary.

The bottom line here is don’t be afraid to explore non-traditional funding approaches. A motivated seller might agree to finance the entire deal without a downpayment at all. And to be sure, these kinds of deals are not usually advertised on the MLS or in the pages of your local newspaper. But luckily for us living in this modern age of convenience, there are such things as telephones and front doors. Try driving around a few neighborhoods and talking to a few owners with ‘for sale’ signs in their front yard.

Who knows? You just might find yourself a motivated seller who agrees to put you into an income property for $2,000 or less. (Top image: Flickr | amslerPIX)

The Bitcoin Baby and Ben Bernanke