The Bitcoin Baby and Ben Bernanke: Digital Currency’s Dark Side 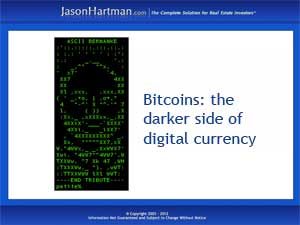 The rise of the Bitcoin has the financial world alternately cheering and groaning. Though at first the creation of a wholly digital currency seemed little more than an online novelty, the Bitcoin has spread its wings in ways both bad and good. The birth of the first Bitcoin baby and the appearance of Ben Bernanke’s image – and other disturbing messages – in Bitcoin code reveal how far the digital money has come, where it needs to go, and why investors should pay attention.

A while ago we brought you news about the Bitcoin’s sudden rise in trading. Created as a global digital currency that anyone could use, anywhere, Bitcoins are created digitally through a complex algorithm users apply. They can then be earned or bought with regular currency for use among retailers and service providers who accept them around the world.  Bitcoin stock has taken a rollercoaster ride from a high of $266 to a low of half that, in 2013 alone.

Traditional financial institutions have taken a dim view of the virtual coins. “It’s not money,” snapped Forbes, and Huffington Post Finance predicted the Bit coin will never take off. But it continues to make inroad into transactions of all kinds. Enter the Bitcoin baby – a child born of an in-vitro fertilization procedure paid for entirely by Bitcoins.

Dr. C Terence Lee, the California fertility specialist who performed the procedure is an ardent Bitcoin supporter who hopes to persuade all his patients to pay him this way. The “Bitcoin Baby” whose photograph appears on much of his advertising is the most public face of Bitcoin transactions which can cover most anything that two parties agree to buy and sell.

Dangerous Tweaks to the Code

But the dark side of Bitcoin technology raises concerns that haven’t been completely addressed. According to CNN’s latest update on Bitcoins, the online database, or “ledger” that tracks Bitcoin transactions can be accessed by any user with the computer skills to do it. And because Bitcoins are beloved by cyber-geeks and code lovers who tinker constantly with its algorithms to create more coins, the Bitcoin code has been tweaked repeatedly to inject personal messages and links.

Most of these have been benign or even comical, such as the portrait of Federal Reserve Chairman Ben Bernanke that emerges when certain bits of altered code are translated into text, or even statements like “I love turtles.” But recently the Bitcoin code became infected with a series of links to child pornography sites, which prompted an investigation by the US Justice Department and cast a shadow on the Bitcoin just as it appeared to be gaining more credibility as a legitimate currency/

Is the Bitcoin real money – or just an annoying upstart, as the traditionalists at Forbes and other financial sites would have it? In certain markets, the digital money is holding its own – and even advancing, as demonstrated by the presence of the Bitcoin baby. But the easy tweaking of its core code for silly – and serious = purposes also shows that the Bitcoin has some growing up to do.  (Top image: Flickr/TravisGoodspeed)

Jason Hartman.com is the Complete Solution for Real Estate Investing. Read more from our archives:

Are Bitcoins Becoming the Next Bubble?