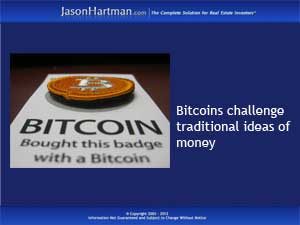 Money has come a long way from its early days when societies assigned a value to objects and allowed them to be used in trade for other things. In most of the world, modern currency is centralized, issued only by authorized entities and usually backed by a valuable physical commodity such as gold. But what if a currency existed that functioned much like in those earlier cultures – independent of third party control and backed purely by its creators? Enter the Bitcoin (BTC), a digital currency praised by users as a way to conduct instant, secure transactions worldwide – without the interference of external government entities.

The Bitcoin platform uses peer-to-peer technology to create a network that moves Bitcoins among users and generates new coins without the backing of a central authority. It’s a construct based on the notion of crypto-currency, harking back to the early days of money, when it was simply whatever a society or culture agreed that it was. Members of the Bitcoin community spend Bitcoins virtually just like any currency, and it’s estimated that the value of Bitooins has now topped $1 billion.

Like “real” currency, the value of Bitcoins can fluctuate. According to recent Business Insider article, as of March 2013 a Bitcoin was worth $42.98. Because they’re generated by the system, the supply of Bitcoins will eventually top out at 21 million, according to current calculations. After that, no more will be produced. They’ll remain in circulation among users of the network, just as currency does in any closed society. But unlike physical currency, Bitcoins have unique properties that, some observers say, could in time pose a serious threat to established currency systems.

Because Bitcoins aren’t backed by a central authority, they can’t be inflated. Transactions using Bitcoins aren’t taxed and, because they’re generally anonymous and conducted within the network, can’t be stopped. Bitcoin proponents point out that governments would need to shut down the entire Internet to eradicate it.

Because of its dramatic rise in just four years to its current status as a legitimate, independent digital currency, Bitcoin has become the target of speculators and investors seeking to grab a piece of the pie. But because Bitcoins are produced mathematically at a steady clip, it’s not so easy to manipulate them, hoard them or devalue them.

Ironically, though, getting started with using Bitcoins involves buying a starter stock of them using conventional currency. Once in the network and conducting transactions, users are on their way to doing business exclusively with Bitcoins. Individuals who want to generate more can become Bitcoin “miners” – people who use sophisticated graphics software to solve the problems and get more Bitcoins, which can be converted to physical cash.

The number of Bitcoin transactions conducted worldwide continues to increase, with increasing numbers of major online businesses accepting them as payments. Transactions can be conducted privately between users, too. It may take a while before the Bitcoin gives traditional currency a (pun intended) run for its money, but users say that day is coming. For investors following Jason Hartman’s recommendations for creating wealth in real estate, it may be wise to keep an eye on the progress of the new coin on the block. (Top image: Flickr/sylvan)