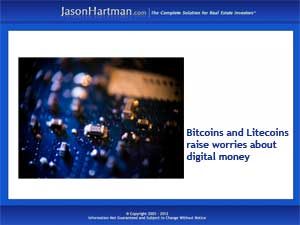 Once the edgy digital darling beloved by cybergeeks around the world, the Bitcoin has gone – well, a little too mainstream for some tastes. Eagerly traded in standard stock exchanges and used for well-publicized purchases such as in vitro fertilization, the virtual currency has taken on many of the characteristics of traditional money. Enter the Litecoin, the Bitcoin’s digital successor, and the new love of the cyber world.

Like the Bitcoin, the LItecoin is a completely digital currency that’s generated online through a process called “miming” – cracking pieces of code to create a new coin. And like the Bitcoin, Litecoins aren’t backed by any physical assets or institutions. Both these new coins are used in much the same way – traded on line for a variety of goods and services.

But the differences between Bitcoins and their digital successors are more striking than their similarities—and provide clues about the future of virtual money and its impact on investing and global marketplaces.

According to most accounts, the actual creator of the Bitcoin is an anonymous programmer who designed the algorithms that have been mined again and again to generate the Bitcoins now available for use. The LItecoin was produced by CipherMine, a UK-based company whose stock is soaring since the Litecoin went public.

Both Bitcoins and Litecoins are mined by running software that generates endless combinations of code that can unlock a new coin. That means that the number of coins that can be created is limited. But the cap is much higher for Litecoins — 85 million to the 21 million limit for Bitcoins. That means Litecoins have the potential for much wider circulation.

It also means that they’re worth less than the equivalent Bitcoin. The current value of a Litecoin is now $2.70, compared to $90 for a Bitcoin. And, because Litecoins are newer, they command a smaller slice of the digital currency pie – and they may not be accepted in places where Bitcoins are used.

Still, the Bitocin is the elder statesman in the world of digital currency and it won’t give up its place without a struggle. But the success of the Bitcoin has paved the way for more upstarts like the Litceoin and, say financial experts, the Bitcoin will probably remand the “gold standard” against which other digital monies will be measured.

Both kinds of digital currency exist and are used because users agree to do so. If that ceases to be true, they’re worth nothing. But for now, both the Bitcoin and the Litecoin are forcing people to rethink what money is and what it will buy.  (Top image: Flickr/KevFoster)

The Bitcoin Baby and Ben Bernanke: Digital Currency’s Dark Side