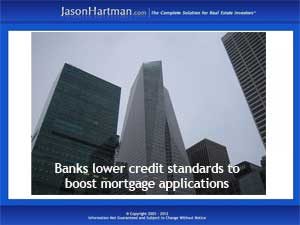 How low can you go? A growing number of mortgage lenders around the country are about to find out, as they lower the minimum credit score requirements for getting a loan in hopes of jump starting a sagging housing market.

We’ve reported previously about the ongoing saga of mortgage lending reform in the wake of the housing collapse of a few years ago – a crash that stemmed in large part from the wholesale granting of mortgages to unqualified homebuyers who then lost their houses in spectacular fashion.

That led to the much-publicized investigations into widespread fraud and illegal practices on the part of the nations big banks, and the eventual passing of the Dodd Frank Act that aimed to protect borrowers from predatory lending practices – and themselves. The latest piece of protection to take effect was the Qualified Mortgage Rule in January 2014, which established tighter criteria for mortgage applicants and legal protections for lenders that followed them.

But those good intentions had the unintended effect of slowing mortgage applications. Those tighter lending standards mandated larger down payments, higher credit scores and a lower debt to income ratio for most buyers – all measures to make it more likely that borrowers could carry the loan without defaulting.

But those standards ended up locking out a lot of potential purchasers with lower than optimal credit scores or too much debt to suit. With interest rats staying low and housing prices going up, lenders began making adjustments to attract a wider range of potential borrowers.

The tinkering centered on lowering down payment requirements and adjusting credit score thresholds downward. In 2013 the minimum acceptable credit score for a new mortgage underwritten by private loan providers had been 761; by spring 2014 it had dropped to 755. And for federal mortgage services such as the FHA, scores dropped even lower – from 696 to 684.

But won’t lowering the credit requirements open the door to more iffy borrowers who will fall into default? And doesn’t that make the Qualified Mortgage Rule irrelevant? Not necessarily, say lenders and housing industry observers. Even though the QMR took effect in January, borrowers have always been able to offer any loan products they choose – but by stepping outside the bounds of the QRM, they lose the protection from prosecution over bad loans that it provides.

And since mortgage borrowing overall has dropped, loosening credit score requirements could boost the numbers – and lenders’ revenue. What’s more, it’s not just demand for new loans that has fallen – refinancing applications have taken a nosedive across the industry. That means lenders have to find ways to make loan products available to more potential borrowers.

Since interest rates are continuing low –for now, the move to lower credit scores is good news not just for residential homebuyers, but especially for income property investors, who may have new opportunities to build wealth in real estate, the way Jason Hartman recommends. (Top image:Flickr/Philip Taylor)

Why So Few New Mortgages?