Is The Housing Market Slumping? 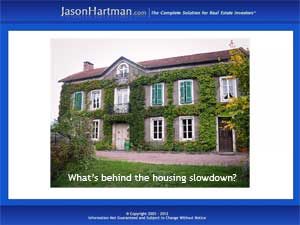 In the years since the massive housing collapse of 2008, it seemed that the housing market was recovering nicely, with more homes purchases and rising prices every year. By 2013, some market watchers were going so far as to speak in terms of a “robust” recovery. But in the spring of 2014, those voices have fallen silent, faced with a slowdown in housing that has implications for the growth of the economy in general.

Although the housing market overall (and the many small markets that create it) hasn’t come near the crisis point it hit back in 2008 when so may homeowners fell into foreclosure, it’s turning out be far flatter than expected. Those encouraging numbers from last year had fueled hope for a much stronger performance by this time, with a corresponding jump in employment and overall consumer activity.

But so far that hasn’t happened. Sales of both new and existing homes are down, and the number of new mortgage applications has hit a 14 year low. That correlates with weaker than expected job growth and a slump in overall consumer confidence.

Economists and financial experts point to several factors that could be contributing to the downturn, but what’s motivating them isn’t so clear. Mortgage applications are down for sure – but is that because of a lack of consumer confidence in housing or the simple fact that the newly implemented Qualified Mortgage Rule’s higher standards shut out many who might otherwise be buying houses?

Other possibilities involve the massive but little discussed ballooning of student loan debt, which may be keeping young buyers out of the market, and a stubbornly flat job market. Or rising home pieces, once hailed as a sign of recovery, might be pricing some hopeful homeowners out of the market.

But a recent article on The Daily Ticker floats the theory that the housing recovery of the last couple of years was only an illusion anyway, caused by investors who bought large numbers of foreclosed houses at bargain basement prices. That kind of activity, the argument goes, artificially inflated the numbers on home sales and failed to reflect the absence of residential homeowners from the equation.

Now, though, housing prices are up, and those cheap foreclosures just aren’t in the pipeline in the same numbers as before. And although interest rates are staying low for now, the tighter mortgage standards – which affect investors too – account at least in part for the slowing of mortgage applications. Those factors, say market watchers, probably won’t change any time soon.

As Jason Hartman says, all real estate is local, though, so it’s important for investors to consider what’s happening in the markets that matter to them, where conditions may be very different – and the trends of 2014 don’t apply.  (Top image:Flickr/ardyll)

Get Free Money Out Of Your Investment