Equity Can Be Riskier Than Debt 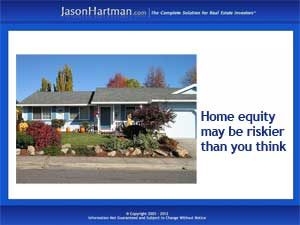 The story flies in the face of conventional wisdom about home ownership. A Washington DC homeowner loses his fully paid for home — with all its accumulated equity – all because of an unpaid property tax bill totaling just $134. That’s the world of tax lien sales – a not always scrupulous avenue for investors to grab properties for a song, leaving homeowners who trusted in equity empty handed.

The DC homeowner in question owned a home worth nearly $200,000, which had been paid for in full two decades ago. But his unpaid property tax bill created the problem. In cases like this, the city can impose a lien on the property for the back taxes. Enter the tax lien investors, who buy up tax liens at auction and charge the homeowner interest and other fees for a few months. Then, if the debt isn’t paid, they foreclose on the property –leaving the homeowner with nothing.

The practice of tax lien investing has been the target of an investigative report by the Washington Post and is being monitored by housing advocates nationwide because of the practice’s potential for harming some of the most vulnerable homeowners – older individuals, many of whom are battling disabilities and illnesses.

All too often, tax liens are imposed on older properties that have been fully paid off for a while. The tax bill in question is frequently minuscule, often long forgotten, or neglected due to an owner’s battle with dementia or other problems. The Washington Post piece notes a case involving a 95 year old woman in a nursing home who lost her house for a bill of just $44.79.

Ta liens aren’t the only way that faith in home equity can prove unfounded. Mortgage holders are eligible for a wide range of tax breaks those owners of paid for properties can’t take. And in cases of disasters, mortgage holders may be able to get some support from lenders, as happened in the aftermath of the devastating Hurricane Sandy.

The riskiness of home equity is one reason Jason Hartman recommends keeping properties financed with long-term mortgages. That way, using other people’s money can be the best way to hold onto your own. (Top image: Flickr/rieh)

Is the Housing Recovery on Shaky Ground?