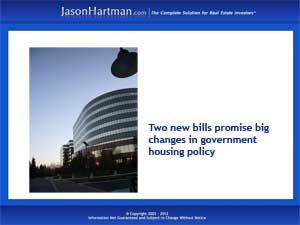 Capitol Hill is taking aim at housing finance reform. With not one, but two new bills in contention for reforming the government’s role in home loans and homeowner bailouts, legislators on both sides of the aisle are competing to form a new, but not necessarily kinder and gentler policy on managing home lending. As these proposals wend their way through hearings, here’s the latest in our intermittent series of posts on the battle to fix US hosing policies – and what that means for income property investors.

As we reported in a previous post, the Republican-led House Financial Services Committee came up with a bill called the PATH (Protecting America Taxpayers and Homeowners) Act that’s now under review. Even Federal Reserve Chairman Ben Bernanke weighed in on the provisions of this bill, urging its sponsors to consider carefully the role government would be expected to play in its future of increased privatization.

The PATH act calls for the elimination of housing lenders Fannie Mae and Freddie Mac, with an infusion of private capital that would help secure loans and support homeowners. And, despite the bill’s title, it would also protect mortgage lenders from meltdowns like the housing collapse of a few years ago by tightening lending standards to weed put subprime borrowers.

On the other side of the debate is the bipartisan Housing Finance Reform and Taxpayer Protection Act. With no hope of making a friendly acronym from that, it’s being called the Corker-Warner Bill after its sponsors, Senators Bob Corker (R-Tenn.) and Mark Warner (D-Va). Introduced last month, this bill aims not to eliminate the government’s involvement in housing, but to create a new entity that would add more federal protections for lenders and borrowers in case of another massive credit crash.

Both these bills have the potential for drastically changing the landscape of mortgage lending for both residential homebuyers and investors. The Federal Reserve is winding down its securities buyup, a manipulation of the market that’s been keeping interest rates artificially low. Some housing industry experts point out that as rates rise to reflect the natural balances in the market, the shifting of more lending to private companies could push loan costs even higher and shut buyer out of the market. And the Corker-Warner bill’s plan would provide protections only in the event of another credit crisis and limit some types of federal lending.

These bills aren’t becoming law any time soon, and wary housing experts see them as the beginning of a long overdue debate. But with long-term implications for lending standards and the fixed-rate mortgages Jason Hartman recommends, the future of the PATH and Corker-Warmer Bills is worth watching for investors building wealth in income property.  (Top image:Flickr/gorogen)

Harney, Ken. “Talk of Doing Away With Fannie and Freddie Is Just That.” Inman News. Inman.com 18 Jul 201