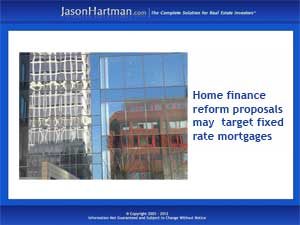 As the Federal Reserve prepares to wind down its bond buying stimulus plan, policymakers in Washington are debating proposals to make drastic changes to the whole housing finance system – changes whose impact isn’t yet clearly understood. That’s why Fed Chairman Ben Bernanke recently urged lawmakers to establish a plan for the government’s role in housing before drafting sweeping legislation to reshape the system.

At issue: whether the government’s large-scale involvement in the housing market should continue at all – and if it does, in what form. The House financial Services Committee has been drafting a bill that would sharply limit that involvement and invite more private capital into the mix. Other proposals are less draconian, but all recognize that the government’s role in funding housing needs to be re-evaluated.

In remarks before the Financial Services committee, Bernanke acknowledged that the old model of government-sponsored enterprises, or GSEs, which includes the creation and ongoing support of megalenders Fannie Mae and Freddie Mac, clearly isn’t working well. Fannie and Freddie’s role in the recent housing collapse has been well documented, and in the years since, these entities have been bailed out and cleaned up, and put back into the mortgage lending business.

Currently, the government backs one in 10 new mortgages through Fannie Mae and Freddie Mac and the Federal Housing Agency, or FHA. The government is also responsible for most of the refinancing and bailout programs for homeowners in crisis. New proposals by members of the Financial Services Committee would sharply curtail government involvement in those programs and shift some, if not most, of its services to private companies.

That, say supporters, would allow for an infusion of private capital into the government’s home finance picture and eliminate total reliance on government initiatives like the bond buyup plan to stimulate the housing recovery. Privatization of the government’s functions could benefit borrowers in the long term, then, by making more funds available to subsidize loans.

But these proposed plans also include tighter standards on lending with provisions like the Qualified Mortgage rule that establishes strict income and debt limits. Although that’s partly in response to the role Fannie Mae and Freddie Mac played in the subprime mortgage fiasco that created conditions for the housing collapse, those standards could shut out numerous potential borrowers and slow the recovery.

Another area of concern in the proposed revamping of the system is the future of the traditional 30-year fixed rate mortgage, a mainstay of Jason Hartman’s investing recommendations. If the government’s role in backing these loans is limited can the private sector fill the gap?

Changes to the current system are inevitable, according to housing industry experts. But what form those changes will ultimately take is up to the Financial Services Committee and other policy makers. And. as Bernanke points out, successful reform that benefits borrowers depends on a clear vision of what government should – and shouldn’t – do to keep the housing recovery humming. (Top image:Flickr/PaperCat)

How Green Is Your Mortgage?