Automated Assessments Protect Lenders – But How About Borrowers? 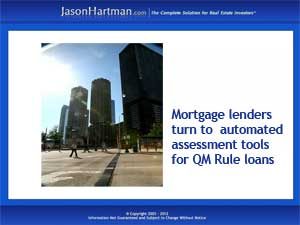 To lenders worried about how the Qualified Mortgage Rule will affect mortgage loan liability: never fear, automated assessment tools are here, as a growing number of software companies offer online solutions to help mortgage lenders negotiate the provisions of the QM Rule(s), avoid liability – and make more money in the process. .

We’ve been talking about the Qualified Mortgage Rule a lot in this space lately – and that’s because its provisions touch all aspects of the residential housing market – a change that, according to some financial experts, marks a new era in mortgage lending, with benefits and drawbacks for both lenders and borrowers.

The QM Rule in its various incarnations is a part of the sweeping Dodd Frank Act aimed at reforming mortgage industry abuses and protecting vulnerable borrowers. While its various provisions have been the subject of hot debate among housing advocates and other housing industry professionals, one thing remains clear – the Rule, destined to be fully implemented in January 2014, creates accountability for lenders who make risky loans.

By establishing tighter lending standards and requiring lenders to assume risks on their loans or leave themselves open to lawsuits, the QM Rule aims to reduce the amount of subprime loans that contributed to the housing collapse of 2008.

In order to do that, the Rule requires lenders to hold borrowers to a set of more stringent eligibility standards including a tighter debt to income ratio, higher credit scores and ability to place a down payment on the purchase – a provision that underwent serious modification under pressure from housing lobbyists. But in all its incarnations, the new protocol for screening mortgage applicants is subject to judgment calls and manipulation. And that can leave banks open to the same kinds of problems that led to the housing collapse.

Now, to help mortgage lenders protect themselves from charges of abuse and deliberately floating risky loans – important issues in the wake of the housing collapse and the mortgage scandals that followed – a new industry has emerged. With software packages specifically designed for the mortgage industry, lenders large and small can install automated assessment tools that take the subjective – read “human” – element out of the equation and purport to help lenders avoid the penalties and possible litigation that, thanks to Dodd Frank, can spring from making bad loans.

These online assessment tools feature calculators for Ability to Repay (ATR) and other QM Rule eligibility standards. They offer a way for lenders to document compliance with the Rule, and to red flag areas that might mean the loan violates the “safe harbor” standards for compliant lending. Lenders embrace such tools with enthusiasm as a way to process loans fast with a high degree of standardization – the software does the work, quickly and predictably.

Though the solutions provided automated QM assessment tools are aimed at protecting lenders, the standardization they promise could protect borrowers too, with better documentation and consistent application of the Rule’s provisions. And though the new tools are intended to protect the interests of lenders, they just might benefit investors taking out mortgages on income property, as Jason Hartman advises.  (Top image: Flickr/ooperweb)

Jason Hartman is the complete  solution for real estate investing. Read more from our archives:

What Happens to Mortgages in a Government Shutdown?