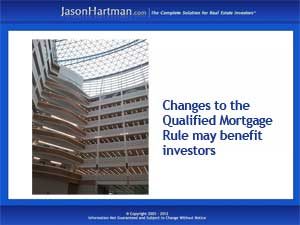 The Qualified Mortgage Rule – a piece of the Dodd Frank Act designed to prevent another mortgage meltdown like the one in 2008 – has drawn fire from the mortgage industry and consumer advocates alike. And as we’ve noted before in this space, it offers a mixed message for the housing industry as a whole. But a key new change to the QM Rule that raises fears of another housing crash may be a boon to investors in income property.

The Qualified Mortgage Rule sets new standards for mortgage lending that are meant to protect vulnerable borrowers and penalize lenders making risky loans – a bad combination that laid the groundwork for the 2008 crisis. Back then, virtually any borrower could get a loan – low down, no down or whatever the market would bear. And lenders could make those loans nearly risk free.

But after millions of those “subprime” borrowers defaulted and fell into foreclosure, a succession of well publicized mortgage fraud investigations and lawsuits laid the groundwork for new legislation aimed at eliminating some of the risks of something similar happening in the future.

So the Dodd Frank Act was born, and from it the Qualified Mortgage Rule which set high standards for borrowers including a 20 percent down payment, the 43 percent debt to income ratio and credit score cutoffs. For their part lenders would now have to carry some of the risk on their own subprime loam products that didn’t meet the QM standards.

While that change has the intended effect (on paper anyway) of opening doors to otherwise qualified applicants who just don’t have 20 percent to put down on a house, it also benefits independent income property investors who want to buy multiple properties.

A 20 percent down payment on every property can prove impossible for the investor/entrepreneur, who may well be otherwise qualified for the loan. But with the easing of the down payment part of the QM Rule – which now allows for either no down payment at all or a minimal one — the small investor may find it easier to manage a multiple-property investment of the kind Jason Hartman recommends.

Mortgage reform efforts will probably never succeed in pleasing everyone. But the hasty retreat over the Qualified Mortgage Rule’s down payment provisions may boost the housing recovery in unexpected ways – and open doors for income property investors to help the process along.  (Top image: Flickr/jeremylevine)

Jason Hartman is the complete solution for real estate investors. Read more from our archives:

The fed’s Reversal Rocks the Markets