The Fed’s Reversal Rocks the Markets 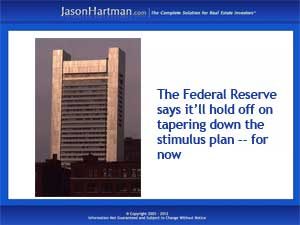 Remember “Septaper” – that awful sobriquet for the Federal Reserve’s planned taper down of its asset-buying stimulus plan? After months of hinting that led up to an expected draw down in September 2013, the Fed pulled an about-face, announcing that the plan will roll on at its present levels for now. And that news has boosted stocks and consumer markets worldwide.

The Fed’s stimulus plan was put in place just a year ago, in September 2012, as a measure to boost up the housing market and indirectly, other US economic sectors, by buying up billions of dollars worth of mortgage-backed securities every month. That way, the theory went, money going back to lenders could keep interest rates low, encourage people to buy homes, put people to work, and make it easier to buy things.

As the health of various indicators such as employment and housing starts waxed and waned, so did the Fed’s plan to wind down the program and let the market dictate interest rates naturally. And the latest news, that September 2013 was really going to be the month that the securities buy up would begin scaling back, had market watchers worldwide waiting for the fallout.

But now the picture is entirely different. News that US interest rates would be staying low for at least the near future calmed jittery investors and sent global markets surging, affecting everything from currency trading to the rollercoaster prices of gold.

Asian markets, in particular, welcomed the Fed’s decision to hold the line. Many Asian countries, facing a slowdown in growth and loss of capital, see the continued lower interest rates as a reprieve that allows them to regroup and create new strategies for stimulating economic growth and clout in world markets.

At home, too, the Fed’s decision is good news for consumers and investors. Because the Fed’s plans could change at any time, there’s a feeling of urgency about taking advantage of the lower interest rates the program creates. That means more purchasing activity, as people spend more and take out loans to buy everything from appliances to houses.

Even with the stimulus plan in place, interest rates are creeping upward from the historic lows of a few months ago. Still, they’re low enough to keep open a window of opportunity for home purchasing – a window that could begin to close with the Fed’s next decision on the direction of the stimulus.

For investors building wealth through income property as Jason Hartman advises, the Fed’s postponement of its taper-down means that for now, it’s still a good time to buy homes. The housing market is still on the upswing, so investors can get ‘em while they’re hot –until the next “taper” rolls around.  (Top image: Flickr/CityofBostonArchives)

Online-Only Banking — Is It Safe?