What Happens to Mortgages in a Government Shutdown? 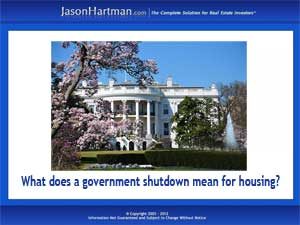 The threatened government shutdown has become reality, as policymakers on both sides of the aisle find it impossible to play nice. It’s unclear how long the situation will last, and it’s raising real concerns about what will happen to a wide range of government sponsored programs – including housing-related agencies responsible for originating and servicing mortgages. But the Department of Housing and Urban Development has a little known but critically important contingency plan for keeping housing initiatives rolling while dealing with this kind of political standoff.
.
The government has taken time outs before, leaving consumers and service providers scrambling to keep things moving smoothly until the crisis is resolved. In the current situation, though, housing advocates and representatives fear that a shutdown could mean a moratorium on mortgage loans – a key piece of keeping the housing recovery going. So mortgage lenders and real estate professionals are taking a closer look at HUD’s contingency planning.

Although government’s role in housing has been the subject of recent debates and the target of new bills floated by both parties, for now various government backed entities, including the Federal Housing Administration and quasi-government bodies Fannie Mae and Freddie Mac, originate about two thirds of the residential mortgages available both to investors and residential homebuyers in the country. A government shut down of whatever duration could stall new lending and the processing of current loans.

But HUD has a plan although a new report by HousingWire points out that the plan seems to be constantly changing, leaving housing professionals scrambling to get the latest information. The latest version available allows for HID to continue to endorse lending in the wake of a shutdown – but only for single-family home loans.

Under the housing contingency plan, the FHA would be able to generate single-family home mortgages during a government shutdown. A small percentage of HUD’s more than 9,000 staffers would also stay on the job to process new loans.

Because mortgages originating with the FHA and its cousins Fannie and Freddie are serviced by banks and other financial institutes around the country, private lenders are also keeping an uneasy eye on the machinations in Washington and the final outcome of HUD’s contingency planning.

It’s unclear how long a government shutdown could last – the doors may stay closed until both sides of the aisle see eye to eye. But HUD’s contingency plans acknowledge the importance of keeping the housing recovery on track in any case. And that’s good news for investors building wealth through residential real estate — as Jason Hartman advises.  (Top image: Flickr/EGuideTravel)