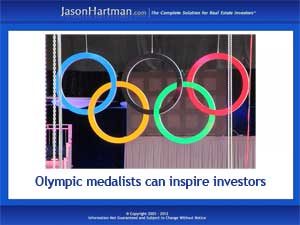 The Olympic Winter Games are on in Sochi, and the best athletes the world over are bringing their best to the competition. And though it may seem that building wealth through income property investing doesn’t have much to do with winning the luge or the race, achieving either goal requires some of the same qualities. Here are a few quotes from Olympians past and present that might inspire investors to make their own dreams a reality too:

“If you fail to prepare, you’re prepared to fail.” – Mark Spitz, Winner of 7 Gold Medals at 1972 Munich Olympic Games

“I know what I have to do, and I’m going to do whatever it takes. If I do it, I’ll come out a winner, and it doesn’t matter what anyone else does.” –Florence Griffith Joyner, world champion and three-time Olympic gold medalist in track and field

“I am building a fire, and every day I train, I add more fuel. At just the right moment, I light the match.” –Mia Hamm (American football player, 2004 Summer Olympics)

“He who is not courageous enough to take risks will accomplish nothing in life.” — Muhammad Ali, Winner of Gold Medal at 1960 Rome Summer Olympics

“You have to believe in yourself when no one else does- that makes you a winner right there.” –Venus Williams, Winner of 3 Gold Medals at 2000 Sydney and 2008 Beijing Olympic Games

“Each of us has a fire in our hearts for something. It’s our goal in life to find it and keep it lit.” — Mary Lou Retton, gold, silver and bronze medalist in gymnastics in 1984

“Nothing can substitute for just plain hard work.” — Andre Agassi, gold medalist in tennis in 1996

“Never underestimate the power of dreams and the influence of the human spirit. We are all the same in this notion: The potential for greatness lives within each of us.” — Wilma Rudolph, gold medalist in athletics in 1960 and bronze medalist in 1956

“Never put an age limit on your dreams.” — Dara Torres, gold medalist in swimming in 2000

The key points these athletes make about succeeding and realizing dreams echo Jason Hartman’s own 10 Commandments for Investing Success. Winning requires you to prepare yourself, accept obstacles and overcome then, take control of the process and keep focused on the goal – in investing as well as in sports.  (Top image:Flickr/DavidJones)

The Bitcoin: Real Money or a Payment System?