The Bitcoin: Real Money or a Payment System? 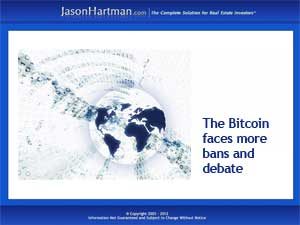 Bitcoin’s identity crisis continues, as the upstart digital currency makes more inroads into traditional commerce the world over, triggering government bans and prompting financial experts to question whether Bitcoin will behave like a regular currency capable of riding out the inevitable ups and downs that affect “real” money.

We’ve reported here numerous times on the ongoing saga of the Bitcoin. As the cybercurrency gains ground in transactions including big ticket car purchases, travel and real estate, institutions around the world that run on traditional currency models are grappling with how to treat this new addition to the monetary world. Bitcoin is now banned by the governments of Russia and China because of links to a recent high profile money-laundering scheme involving the drug marketplace Silk Road. And financial and monetary experts continue to debate just what Bitcoin really is.

Bitcoin is now traded in the world’s money markets, with prices fluctuating like “real” currency. Does that mean, then, that Bitcoin is vulnerable to the forces of inflation and deflation, which reduce a currency’s actual value relative to market standards? Or will Bitcoin behave more like a simple payment exchange such as PayPal?

PayPal is an online payment system that lets people pay for things easily and securely using an online account within the system. Bitcoin, too, lets people conduct transactions in Bitcoin in a safe, anonymous online atmosphere. But the crucial difference lies in what backs the account. Although exchanges like PayPal operate quickly and easily to move payments electronically and receive goods, PayPal payments have to be backed by “real” money in a real bank account.

One reason users love Bitcoin is that it really is a free-floating entirely digital currency system that asks nothing of its users. Once two users decide to conduct their transaction with Bitcoin, the deal is done. But market watchers worry about the outcomes if Bitcoin crashes and ends up worth nothing – a distinct possibility if the crackdowns continue and Bitcoin exchanges withdraw their support.

In that case, buyers and sellers in large-scale transactions involving millions of dollars’ worth of Bitcoin might end up taking major losses that they can’t recoup. Someone who sold a property or other high end item for Bitcoin might end up with nothing to show for the transaction but a few bits of data on a hard drive. And the anonymous nature of Bitcoin transactions makes it impossible to seek any kind of legal recourse if a deal goes bad.

The Bitcoin’s road to maturity has been a rocky one, and it’s now at a crossroads, as governments, money markets and financial institutions try to figure out where it belongs in the larger scheme of world money – or if it belongs at all. With all its twists and turns, the Bitcoin story isn’t over – and as Jason Hartman says, it’s one investors need to watch.(Top image: Flickr/bitcoinnation)

Jason Hartman is the complete solution for real estate investors. Read more from our archives:

Housing Bust Rearranges the US Economy