Younger Investors Find Their Own Path 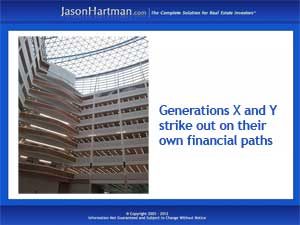 The “generation gap” is blamed for differences in attitudes and behaviors on everything from music to careers. Now, according to a new report by the New York Times, it’s a term that can be applied to the way three generations – baby boomers and the so-called Generations X and Y – manage their money. And the ways in which these three groups view investing, saving and spending may have profound implications for the long-term economic picture.

According to the New York Times, a report released by the leading financial institutions Fidelity, US Trust and Pershing profiled the financial habits of the “baby boom” generation – that huge cohort of people born between 1946 and 1964 – along with the so-called “Generation X” of fortysomethings and their children, the millennials, or Generation Y. Among their findings:

Generations X and Y are more inclined to reject following in their elders’ footsteps when it comes to making financial decisions of all kinds. There’s little inclination to use parents’ banks or financial services, or to use a real estate company that handled the family home purchase. While earlier generations looked to established family connections for managing money, today’s younger investors take pride in striking out on their own.

They’re more inclined to take financial matters into their own hands, too. If the younger generations are going to invest, they prefer to be active investors, busily educating themselves about financial matters and learning about the market’s ups and downs, as Jason Hartman always advises. They’re also more likely to take a do it yourself approach to home ownership, with a willingness to be “hands on’ with repairs and renovations, as well as managing their own investment properties.

That doesn’t mean that these younger investors ignore financial advice. They’re actively seeking out good advisers and listening to them – but they’re clear about their vision and goals and making the final decisions that serve those goals. Older investors, the study found, tended to leave matters in the hands of advisers and act on their recommendations.

Attitudes toward possessions also reflected a marked generational difference. Younger investors, especially those Generation Ys who find success in their twenties, are more willing to turn money into enjoyment, with more purchases of possessions such as cars, boats and vacation homes. They’re more likely to travel and take time off, too. The middle group of Generation Xs appeared more conservative, putting their money into assets like reel estate and shying away from collecting as many possessions.

But it’s important to place these trends in context. Today’s younger investors and money managers may simply have more choice because of the safety net their parents provided. Millennials who can fall back on a parent’s resources can afford to take more risks, and so can Generation X-ers with stable careers and a background of prosperity.

Generalizations can be risky. But financial experts point out that trends in money management typical of these age groups can offer clues not just about the long term health of the economy – but also forthe future of income property investing and the housing recovery.  (Top image: Flickr/gorogen)

Jason Hartman is the complete solution for real estate investing Read more from our archives:

Online-Only Banking: is It Safe?