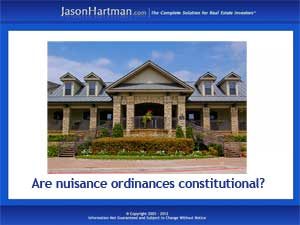 Across the country, communities small and large have enacted ordinances aimed at combating neighborhood crime. Under names like “nuisance ordinances” or “landlord 911 laws,” these local laws are now facing legal challenges because of the harm they can cause to both property owners and their tenants.

Anti- crime ordinances aren’t new. Most cities have laws against public drunkenness, loitering, vagrancy and the like. But those laws are directed at keeping public places safe. The current wave of local rime fighting laws goes a step further, targeting behavior on private property. Although details vary from city to city, the general aim of “landlord 911” legislation makes both landlords and tenants responsible not just for criminal activity on residential property but also for reporting crimes.

In cities where this kind of ordinance holds, landlords are expected to report criminal activity on their property and to evict tenants that are involved in that activity. On paper that sounds good. Landlords can be penalized for not complying and allowing criminal elements on their property. They can face fines, suspension of permits and licenses, or even criminal charges if the problem isn’t cleared up.

The liability doesn’t stop there. Tenants can also be penalized – even if they’re the victim of a crime and have called 911 to report it. Some communities have built in “three-strike” clauses that require a landlord to evict a tenant after three incidents, police calls or interventions on the property – no matter the circumstances.

Proponents of these laws say they’re a necessary measure tp keep communities safe and eradicate criminal activity in rental housing. But critics charge that such ordinances force landlords into acting as de facto police and further victimize tenants who have been crime victims through no fault of their own.

And that’s a violation of the constitutional rights of both landlords and tenants, according to a recent lawsuit filed by the ACLU that challenges the legality of such an ordinance in Noristown, PA. The case in question involved a victim of domestic violence who was penalized over 911 calls when her abusive ex-boyfriend showed up – calls made in part by neighbors because she was too afraid to pick up the phone for fear of being evicted. And under the threes strikes rule in the city’s nuisance ordinance, she eventually was.

These ordinances, argue lawyers pressing the case, allow local law enforcement officials to abdicate responsibility by turning the job over to property owners who are forced into evicting tenants unnecessarily and conducting constant surveillance on the property to stay in compliance. And because even a 911 call from a crime victim on the property counts as a “nuisance,” tenants become afraid to report criminal activity –even if they’re harmed.

The verdict in the Noristown case remains to be seen. But the case itself represents a clear challenge to similar ordinances around the country – and an effort to protect the rights of both property owners and their residents. It’s a case for income property investors to watch closely – and a reminder to do as Jason Hartman recommends: do the homework on local laws that can turn an opportunity into a nightmare. (Top image:  Flickr/milestonemanagement)