Will Taxing the Rich Hurt Housing? 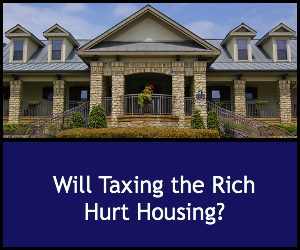 A new proposal to slap uber-wealthy property owners in New York City with extra taxes could mean the end of luxury buildings in the city – and critics fear that this kind of strategy for “taxing the rich” could set a dangerous precedent for other cash strapped US cities.

New York City mayor Bill de Blasio is proposing a new, 4 percent annual property tax on luxury real estate in the city. The surcharge applies to homes and other high-end structures regardless of whether the owners of those buildings actually live in the city. The measure was first proposed by the city’s Fiscal Policy Institute with the aim of targeting those property owners who don’t actually live in the city but whose real estate pushes up the prices of homes and other buildings there.

It’s a revenue gathering strategy for the city, supporters argue. And that feeds much needed money into the system from people that many view as having a relatively free ride on taxes and fees for their very high end properties. The surcharge would also create some balance in a revenue system that draws much of its money from households with lower incomes.

New York real estate is among the priciest in the world. The city is home to the wealthy from many walks of life, from famous faces in the entertainment world to the children of foreign billionaires who want a place to hang out in the Big Apple.

But that kind of over the top real estate is a fixture of the city – and opponents of the mayor’s proposed surcharge fear that even as it adds revenue to the city’s coffers, it will have the unintended – but potentially devastating – effect of discouraging luxury development of all kinds, not just residential property, in the city.

Because that kind of luxury construction is often funded by consortiums of foreign investors, the new tax, if implemented, might also discourage global investment in the city and surrounding communities, too. And those consequences could ripple throughout the entire economy with a downturn in construction and a freeze on new projects.

What’s more, housing market experts say, if the City of New York implements such a tax, it could set a precedent for other cities around the country that are home to a significant amount of higher end real estate. Places like Los Angeles, San Francisco and Chicago attract higher end development, and real estate prices and taxes are also significantly higher than in other markets around the country.

A measure like the one proposed in New York City could have the same effect. Those other American cities also rely on foreign investment to fund numerous building projects – and a special surcharge for those kinds of projects could also lead to a chill that affects the economy of the city – and eventually the country.

Targeting the rich come tax time isn’t new. From tiered tax liability to additional fees and charges based on the value (or cost) of luxury assets, the government has long tried to even the scales by imposing more of a burden on the rich than on the poor.

That strategy, predictably, has the wealthy crying foul. Developers and agents for luxury real estate projects in New York point to the many benefits that kind of high-end real estate development can bring to a city. They’re creating jobs, they say. Propping up the economy by pumping development dollars into it. And the structures they build will become a part of the city’s image forever. It’s a win for the city and the developers.

And it turns out that they may be right in some key ways. Luxury development, including not just residential real estate but also the office buildings, hotels and other structures that boost a city’s profile and reputation, is a major economic stimulus. And taxing it severely would simply mean that developers would pack up their projects and go away to more hospitable areas.

In a recent post to The Bryan Ellis Investing Letter, a developer working in luxury construction observed that slapping a heavy tax on development in New York City and surrounding areas is like “killing the golden goose” – no more golden eggs of million dollar condos and hotels costing billions.

Mayor de Blasio’s proposal, which detractors have labeled a scheme to bankrupt the city and strangle growth, has yet to become law. Perhaps it never will. But the US housing market is still struggling to recover from the historic collapse of a few years ago – and the possibility of any measure that might slow the market down is enough to set alarm bells ringing. (Featured image: Flickr/milemountain)

Are the Days of the Series LLC Over?