Will the 30-Year Mortgage Disappear? 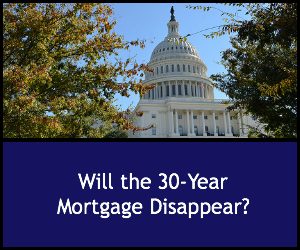 For decades, the 30-year mortgage has been a staple of the US real estate industry, making it pp0ssoble for millions of Americans – and investors – to buy houses without draining their savings. But the good old 30-year mortgage may be a dying breed, as the government gears up for the demise e of Fannie Mae and Freddie Mac.

Fannie Mae, the popular acronym for the Federal National Mortgage Association, and its younger brother Freddie Mac, officially the Federal Home Loan Mortgage Corporation, collectively originate or guarantee over half of all US mortgages and back 90 percent of new loans – and that includes millions of the 30 year variety.

Fanni9e Mae was created back in 1938 as a part of the post-Depression New Deal to shore up real estate by making it possible for people to buy homes now and leverage future income to pay them off over time. Freddie Mac came along later, in 1970, as part of an effort to expand the government’s involvement in the secondary mortgage market.

Throughout the postwar years and beyond, fixed rate mortgages accompanied other kinds of federal support to help Americans go to college, buy homes, find jobs and be productive. But the housing crash of 2007-2008 exposed widespread recklessness, fraud and outright criminal activity in the mortgage-lending world – and Fannie and Freddie were implicated.

The two agencies ended up being bailed out to the time pf $187 billion and placed into conservator ship. But although they’re now largely back in the black, their future is anything but certain. House Republicans went gunning for them right after the crash, with plans to either drastically curb the amount of lending activity or dismantle them outright.

Bill after bill proposing the end of Fannie and Freddie as we know them has been floated, and the Obama administration is now upholding those plans in an effort to prevent another housing bubble and subsequent collapse.

Though there’s been no action yet, and no concrete timetable for the closing of the two agencies, market watchers are speculating about what that scenario could mean for the recovering housing sector – and the aren’t optimistic.

Since a majority of US mortgages originate with Freddie and Fannie, even if they [‘re serviced by private entities such as banks and loan companies, will those private lenders pick up the slack once those two are gone?

The 30 year mortgage, usually at a fixed rate that doesn’t change for the life of he loan, has made it possible for many lower income buyers to purchase property. It’s only one kind of mortgage, of course. Adjustable Rate Mortgages are usually shorter term and feature a deceptively low initial rate that can swiftly balloon to unmanageable proportions. A hallmark of the bubble’s predatory lending practices, they’re favored by lenders who stand to make more money from them.

In a period when homeownership is already at its lowest levels in more than twenty yes and the tighter lending standards imposed after the collapse are already shutting many lower income buyers out of the housing market, the death of the 30 year mortgage could have serious long term consequences.

According to a new report from Armstrong Economics, the end of the 30-year mortgage would stifle the growth of the housing market. Fewer individuals would be able to buy homes on shorter term, or adjustable rate mortgages. They’d need more cash for down payments and the monthly mortgage. Housing prices cud plummet too, potentially sending the market into another recession.

Will private lenders step in where Fannie and Freddie leave off? Current government plans for the end of Fannie and Freddie call for greater private involvement in home lending. And since the end of the 30-year loan could also mean far fewer lenders in general, it may simply not be cost-effective in the end to eliminate it.

For now, though, Fannie and Freddie are still alive and originating loans – and it’s too soon to tell what will actually happen to them, or when. But leveraging the power of 30 year fixed mortgages is a strategy Jason Hartman always recommends – so smart investors may want to grab them while they’re still around.  (Featured image: Flickr/EGuideTravel)

Equity Firms Are Lending to Landlords