Yes or No to a Loan? Depends on the Lender 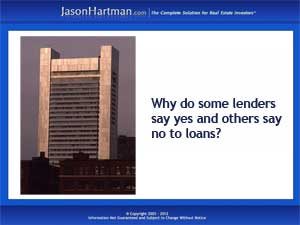 It’s tougher to get financing for buying real estate these days. Banks are issuing fewer loans, and imposing tougher standards on the loans they do issue. But those standards can vary from institution to institution – and some lenders may say yes to a home loan, while others may say no. The reasons for the differences lie in the complex interplay of mortgage reform efforts and the bottom line for individual lenders.

After years of scandals and outright fraud stemming form the housing bubble and subsequent crash in 2007-2008, the mortgage lending business is struggling to recover. Major institutions such as Bank of America, JP Morgan Chase and Citigroup have been sued numerous times by state and federal entities for misdeeds including fraudulent foreclosures and selling bad loans to other investors.

In an attempt to clean up mortgage lending, a number of new laws were enacted to impose stricter standards on lenders themselves and protect consumers trying to get loans. The Dodd Frank Act and a variety of consumer credit protection acts followed, with the goal of preventing more abuses of the kind that contributed to – and followed – the crash.

One of those newly established standards is the Qualified Mortgage Rule, aimed at protecting loan applicants – and lenders – from future defaults. The QM Rule is a federal guideline arising out of the Dodd Frank Act, and it establishes a set of minimum lending criteria intended to screen out risky borrowers and lower the possibility of defaults amd foreclosures.

Most home loans – up to 90% — are backed by the quasi-government housing entities Fannie Mae and Freddie Mac, which are bound by QM Rule underwriting standards. But although some loans are serviced directly by Fannie and Freddie and related agencies such as the Federal Housing Administration, or FHA, most are handled by secondary servicers such as banks and credit unions.

And while those institutions apply the minimum standards passed along by Fannie and Freddie in order to underwrite a loan, they’re also free to impose their own standards on top of that. They can even write very risky loans to marginal buyers – although if they do, they lose the protections provided by the QM Rule.

What does all this mean for the mortgage seeker hoping to finance income property? Do your homework as Jason Hartman recommends. Loan qualifiers such as income requirements, down payments and terms can vary from institution to institution depending on factors such as local economies and housing markets. Interest rates can differ, too.

Research a bank’s loan products through its promotional materials, online information and even a personal chat with a representative. But expert warn that when “interviewing” mortgage lenders, it’s wise not to undergo a credit check unless you’re seriously considering making the loan, since too many credit checks can affect credit scores.

Although the mortgage lending industry is still reeling from the aftermath of the housing collapse, it’s still a pretty good time to finance income property. But since lenders are free to say yes – or no – to a loan request, it’s smart to shop around.  (Top image:Flickr/gorogen)

Jason Hartman is the complete solution for real estate investing. Read more from our guidelines: