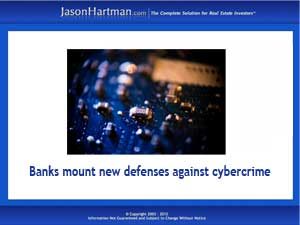 We all know how important it is to keep personal financial information safe from online theft – but can your bank do the same? As financial institutions small and large fall victim to cyberattacks that steal the account information – and money – of thousands of customers, banks worldwide are embracing new strategies to protect their customers and themselves.

Cyberattacks on financial institutions can be crippling. Viruses can disable crucial software and send systems crashing, and skilled hackers can hijack sensitive information and clean out accounts with a few keystrokes. Launched against major organizations, cyberattacks can shut down large-scale events and even government functions. Preventing and detecting this kind of internet sabotage can cost millions and requires the services of a wide range of IT, law enforcement and security companies.

According to a recent Wall Street Journal article, the financial industry is one of the most appealing targets for cyberattacks – and also one of the most vulnerable. And the threat is growing as these institutions grow ever more dependent on computerized accounts and record keeping.

Because cyberattacks come from so many different sources, ranging from individual hackers to government-backed organizations, tracking them down has posed problems for the institutions involved, and for the national and international investigators trying to shut the perpetrators down. But up till now major problems in combating cyberattacks has been a failure to communicate with other institutions and cybercrime task forces.

Now, in a new offensive aimed at protecting banks from online crime, a team sponsored by Credit Suisse is conducting simulated cyberattacks on banks in the UK – a kind of “war games” to test defenses and locate vulnerabilities. Called “Waking Shark !!,” the exercise tests participating institutions’ cyberdefenses in a controlled environment. The simulated attacks are intended to help train It personnel and other staff to spot trouble and to develop new protocols for dealing with cybercrime.

Online crime knows no borders and can strike at any time. Small attacks can even take place quietly, over a long period of time, before officials recognize them. And for customers and clients whose financial information has been compromised, there’s often not much recourse.

The European “war games” sponsored by Credit Suisse aim to change all that. Though the simulation has been emoted to a select few institutions British officials say that the lessons learned will help financial institutions around the globe spot holes in their defenses, train personnel to deal with online attacks, and open channels of communication between organizations, and with cybercrime investigators.

What’s a customer to do? Bank officials stress that as cybercrime gets more sophisticated, so do their defenses, in a sort of cat end mouse game of staying ahead. But for investors relying on the services of lending institutions local and national for financing investment property, Jason Hartman’s advice to stay knowledgeable and in control of the investing process can help: check statements, change passwords often and report anything fishy to the bank and cybercrime authorities.  (Top image:Flickr/cooperweb)