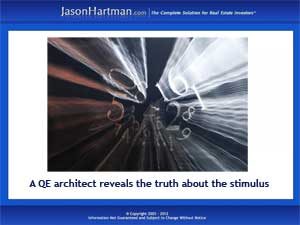 The Federal Reserve’s massive bond buying stimulus program has been in and out of the news for months as the Fed hints at tapering it down, only to backpedal in light of changes to the economic picture. But even as the Fed continues its will they, won’t they dance, a former architect of the program known officially as Quantitative Easing goes on record to admit that the plan did nothing but create another Wall Street bailout.

In a new op-ed piece for the Wall Street Journal, former Federal Reserve official Andrew Huszar, now a senior fellow at Rutgers Business School, offers a public apology to America for creating what he calls the “greatest backdoor Wall Street bailout of all time.”

In 2008, the whole economy was in trouble. The real estate market was crashing, millions of Americans were out of work – and the government was passing legislation to stop the downward spiral of the country’s big banks. That’s when the Fed came up with a new scheme.

The plan involved buying huge amounts of bonds and mortgage backed securities. The goal, as announced by Fed officials, was to help banks keep the cost of credit low enough that average Americas could continue to buy goods and services while the economy turned itself around. As Huszar tells it, the original plan involved buying $1.25 trillion in mortgage bonds in just twelve months – an unprecedented economic stimulus that, the Fed claimed, would have profound effects on the economic picture for all Americans.

Since that first trillion dollar year of bond buying, the Fed has kept it up, buying securities at a rate of roughly $85 million per month since the latest round was announced back in 2012. In response to shifts in the economic landscape such as the recent government shutdown and a changing employment picture, Fed officials have repeatedly raised the possibility of tapering down the program.

Each time the Fed hints at scaling back the bond buyup, it retreats again, citing still-shaky economic conditions and the need to keep interest rates low as a stimulus for housing and other consumer credit purchasing. But, as Huszar points out, there’s only one real beneficiary of the plan: the nation’s big banks.

How’s that? Although interest rates have been kept artificially low thanks to the stimulus, loans are harder to get. Banks are issuing fewer loans, credit is harder to get for many borrowers, and in many cases it isn’t much cheaper than before. That means that most of the money passed on to the banks stayed with the banks, which posted enormous profits thanks to QE securities transactions.

Now, the Fed has announced a commitment to QE through at least 2014. But industry watchers doubt that much tapering will happen during that time, even as outside observers – and some regional Federal Reserve officials on the inside – question the wisdom of keeping it up. And the end result, according to Huszar, is that once again the economy is held hostage to Wall Street, which continues to benefit from the biggest, and sneakiest bailout in US banking history.

Financial experts are praising Andrew Huszar for speaking the truth about QE’s real outcomes. And while the Fed’s continued commitment to QE continues to shape the mortgage-landing picture, individual investors will need to take Jason Hartman’s advice to stay informed and look for the truth behind the promises.  (Top image:Flickr/BGathers)

“The Hustle” Means Another Fraud Settlement for BofA