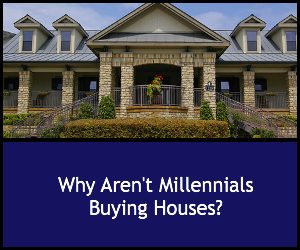 It’s no secret in real estate circles that Millennials aren’t buying houses. And while financial experts cite several key reasons why that’s true, they don’t carry equal weight in all areas of the country – a point worth considering for investors in rental real estate.

The Millennials are those new and recent college graduates that are posing big challenges to mainstream society in a number of ways. They’re now the largest demographic cohort in the country, eclipsing even the celebrated Baby Boomers, and they keep making headlines for a variety of reasons, most of them less than positive: they’re overloaded with debt, they don’t fit traditional work paradigms, they aren’t interested in possessions or marking the typical milestones of American adult life.

All of those things have some validity – and they all relate in ways small and large to the aspect of Millennial living that confounds the housing market most: as a group, this generation is simply not taking the home buying plunge.

According to a new article from MarketWatch, 38 percent of Millennials owned a home n 2012. Compare that to the 52 percent in that age group who owned homes in 1980, and it’s clear that there’s a significant shift in the ability – and willingness – to take on a home purchase if you’re under 35.

US homeownership overall is the lowest it’s been in nearly two decades – even with interest rates that are still relatively low. And with many existing homeowners choosing not to “upsize” to a more lavish home and few new buyers to take up the slack, marker watchers fear that the still recovering housing market could face another setback.

Why aren’t Millennials interested in home buying? And what does that mean for the housing market in general – and income property investors in particular?

The housing landscape has changed drastically since the parents of many Millennials were buying homes and making other large consumer purchases. The housing collapse of 2008 saw millions of homeowners falling into foreclosure and struggling to meet loan payments not just on homes but on other big ticket items like cars.

Post crash reforms created tighter accountability for mortgage lenders and made it harder for new borrowers to get a loan, with higher down payments and better credit score requirements than many could meet. That scenario gives rise to the four main reasons Millennials aren’t buying houses:

They’re carrying a heavy student loan debt. This is probably the best-publicized explanation for why Millennials aren’t making those major transitions to topical American adulthood by buying a house and a car, marrying and settling down to raise a family. They may never pay off that debt in their lifetime, and it impacts their ability to save for a down payment, make enough money for mortgage payments, and make the required credit score cutoffs to qualify for a mortgage.

Even if other factors are workable, making that initial down payment may not be possible for cash strapped Millennials. In a world of low paying jobs, no jobs, and jobs that may not last, Millennials may not be able to save up the cash for the down, especially under today’s tighter standards.

Credit card debt, student loan debt and job uncertainty all contribute to lower credit scores, which keeps many from going forward with even applying for a loan. What’s more, as MarketWatch reports, a considerable number of young workers don’t know what to do to start the buying process in the first place.

While all of these things explain why Millennials aren’t buying, they aren’t always equal. As it turns out, which one of these factors really drives the decision not to buy a house depends on what area of the country the hopeful homeowner lives in.

As Market Watch reports, a Santa Ana based mortgage firm, Carrington Mortgage Services, surveyed Millennials about the main reasons for not buying homes, and the results varied depending on location – and the housing issues facing that particular part of the country.

Young people in the Western states (including Alaska) say that their biggest obstacle to home buying is coming up with a down payment, while those in the relatively affluent Northeast blamed credit card debt. In the Midwest, Millennials blamed the student loan debt problem. And in the South, more people had low credit scores, or just simply didn’t know where to begin.

All those reasons are related – and they reflect general economic conditions in the various regions of the country. And for investors building wealth through income property the way Jason Hartman recommends, knowing the reasons young people are opting our of homeownership also helps to explain why they rent – and helps landlords to make the most of their rental properties when Millennial tenants move in. (Featured image:flickr/milemountain)