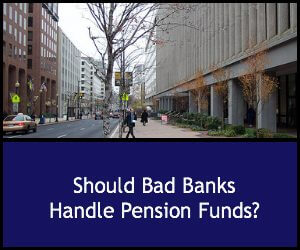 In recent times, American workers have seen their retirement plans evaporate as employers and financial institutions mismanage or whittle away their pension funds. As another round of indictments come down for the nation’s biggest banks, one Senator is asking whether those banks should be allowed to manage retirement monies at all.

In the aftermath of the housing collapse of 2008, major US banks including Citigroup, JP Morgan Chase, Bank of America and a shifting group of other lesser known but still influential financial institutions were investigated, and taken to court on a variety of charges both criminal and civil.

In cases conducted by the US Department of Justice, state district attorneys and other civil and government agencies, those megabanks were accused of misleading and defrauding customers, mainly homeowners who fell victim to predatory lending practices that created the housing bubble and led to its collapse. Some, including Bank of America and Chase, also faced criminal charges for malfeasance on an international scale – manipulating LIBOR and other foreign exchange rates for their own gain.

That last round of charges, brought against Chase, Citigroup, Bank of America and the lower profile Barclays and UBS AG, have triggered new scrutiny of the way these institutions are penalized – or not penalized – in the wake of criminal convictions.

The phrase “too big to fail” hit public awareness after the crash, when government bailouts and slap on the wrist fines kept the country’s big banks doing business as usual in spite of the loot list of charges, and ultimately, convictions, against them. The idea was that a complete collapse of these corrupt institutions would have devastating ripple effects for the whole economy, so they had to be allowed to keep doing business.

That concept still underlies the way banks are treated in the current round of legal actions. After paying nearly $6 billion in fines, Chase, Citigroup and the other three convicted of manipulating international exchange rates were granted waivers by the Securities Exchange Commission to continue doing business as usual – with one exception: handling pensions and retirement funds.

In order to do that, these banks need a separate waiver from the US Department of Labor. And according to a recent article from Business Insider, US Senator Elizabeth Warren (D-Mass) is now calling for the Labor Department to conduct public hearings on whether these institutions should be allowed to manage those kinds of funds.

Why the focus on pensions and retirement funds? One of the outcomes of the housing collapse was the enactment of the Dodd Frank Well Street Reform and Consumer Protection Act of 2010. This was a wide ranging piece of legislation aimed at imposing more accountability on mortgage lenders and protecting unprepared consumers from getting into loans they couldn’t repay.

Dodd Frank led to the creation of the Consumer Finance Protection Bureau and other safeguards including the Qualified Mortgage Rule stipulating the standards loans had to meet in order to avoid penalties. But because the emphasis was on protecting mortgage seekers and homebuyers, pension and retirement plans were largely left out of the mix.

That’s why Senator Warren is calling for hearings to determine whether banks accused of criminal wrongdoing should be allowed to manage the money of vulnerable workers who had hoped to secure a comfortable retirement.

The call for Labor Department hearings also spotlights the practice of dispensing waivers to keep on doing business as usual. Offending institutions can simply pay their fines or meet other settlement stipulations and get a pass to carry on without much pressure to reform practices.

The SEC and Department of Labor have been criticized for their easy granting of waivers without much justification. But public hearings and a call for greater accountability not just in the arena of mortgage lending but also in other areas requiring consumer protections might change that.

Like Dodd Frank, the long list of investigations, lawsuits and penalties levied against the nation’s megabanks reflects government efforts to avoid another devastating collapse in the housing market. But that focus on mortgage lending means other crucial banking functions can be overlooked – and that means those consumers don’t have the same protections.

There may be no slowing of the SEC and Labor’s easy willingness to grant waivers to banks convicted of criminal charges. But public hearings that shed light on their practices benefits accountholders of all kinds – including investors working to build wealth in income property, as Jason Hartman recommends. (Featured image: Flickr/KenMayer)