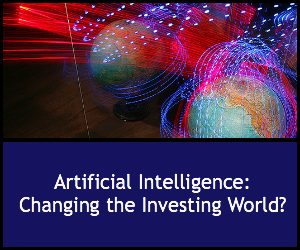 For over a century, scie3nc fiction writers have been inventing futures in which intelligent machines and robots run the world, with either wondrous benefits or devastating consequences for human life. And now, thanks to lightning fast advances in robotics and artificial intelligence technology, that sci fi future is here.

Well, almost. Computers and computer driven devices aren’t expected to reach the processing power of the human brain for another decade or so. But artificial intelligence, or AI technology, is expanding exponentially, with consequences for just about every area of human life – including investing.

The rapid growth of robotics and other AI technologies hold great promise in fields such as medicine and industry. It’s the digital revolution, after all, proceeding just as predicted by Moore’s law – a truism originated by Intel CEO Gordon Moore decades ago to describe the exponential expansion of computing technology over time.

Automation has been handling many kinds of investing and finance related tasks for many years. From the earliest spreadsheet and accounting programs to automate teller machines and later, online banking and stock trading, computer technology has been making money management and investing easier for so long that it’s simply a given in the daily conducting of business anywhere in the world.

But as machines get “smarter,” their ability to take over more complex human tasks also increases. That opens doors to a new kind of human-machine relationship, one where the technology isn’t so much a tool as it is a partner.  That shift, from using smart devices to working with them, promises to revolutionize the way investing in general – and income property investing in particular – is done.

The digital revolution, which refers to technology dedicated to the ceaseless collection and movement of data that can be accessed anywhere, has already brought big changes to the world of real estate. Online tools and services already make it possible for property buyers and sellers to meet, evaluate properties and buy them without ever consulting any of the usual professionals connected with property purchases.

Investors dealing with other kind of assets can also do business anywhere at any time on computers, smartphones and other kinds of devices. Smart tech moves billions in currencies around the globe, too, instantly and wirelessly.  Now, though, advances in robotics and AI technology have produced even smarter machines that can actually “think” – analyze data and make suggestions, predictions and decisions based on available knowledge.

According to a recent article from Financial Times, Kensho, a new Silicon Valley AI startup, is now trying to raise funds to pursue new research that would “train” computers to replace financial analysts and investment advisers with smart machines.

Robots already diagnose disease and assist with surgeries, so that shouldn’t’ be too much of a stretch. And artificial financial advisors join a growing list of financial jobs endangered by smart technology: real estate agents, mortgage lenders an others, as technology makes it possible for people to bypass those professionals to conduct transactions foal l kinds.

AIs already make it possible to take virtual tours of posted properties, “decorate4” them virtually to suit, and, move purchase money instantly. Those applications, along with smarter financial management software that understands and remembers a user’s preferences without even being asked, puts the conducting of a real estate deal in the control of any buyer or seller, without the middlemen and women who used to be essential players in the real estate game.

That threat to human jobs, along with the fears fueled by years of science fiction stories, worries some economist and market experts, who fear that the dawn of the Robotic Age will usher in a time when the world’s reliance on AI technology makes it increasingly vulnerable to hacking, energy failures and human error.

Those who embrace the digital revolution and the rise of AI point opt that some of that juristic technology is already here – ant hat it’s befitting many people. – Including investors in income property, who rely on a multitude of apps and interfaces designed to make handling investment property that much easier.

As Jason Hartman points out, the advancing wave of AI technology represents far, pre new opportunities than threats. And for anyone who uses a smartphone, relies on a GPS or gives commands to a Siri, it’s clear that the AI revolution is already here.  (Featured Image:Flickr/MikhailChurykin)

CW 518L Chess Strategies for Invsting with Douglas Goldstein, Author of “Rich as a King.”

The Qualified Mortgage Rule: What Investors Need to Know