The Qualified Mortgage Rule: What Investors Need to Know 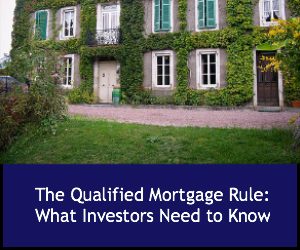 The Ability to Repay and Qualified Mortgage Rules for mortgage lending took effect in January 2014, part of a wide-ranging package of reforms aimed at boosting the housing recovery after the crash of 2008. But those regulations may be having the opposite effect. The ATR and QRM Rules create tighter mortgage lending standards that affect not just residential homebuyers, but investors too.

That massive collapse of the housing market followed the bursting of a wildly profitable bubble driven by reckless lending practices. People were encouraged to buy homes they couldn’t afford, lured by loans with absurdly low introductory rates that ballooned unmanageably months later, or loans granted without any regard to an applicant’s actual income and ability to repay the loan.

Those kinds of lending practices left millions of homes in foreclosure and millions of homeowners with damaged credit and no place to live. To prevent another meltdown, Congress targeted the mortgage industry with wide ranging legislation aimed at keeping lenders accountable and protecting unqualified consumers from getting stuck with loans they couldn’t manage.

The result was the Dodd Frank Wall Street Reform and Consumer Protection Act of 2010. Responding to a long list of predatory and illegal practices that victimized borrowers and broke laws, the Dodd Frank Act provided for the creation of the Consumer Federal Protection Bureau, which instituted the current Qualified Mortgage Rule and the accompanying Ability to Repay regulations.

For the purposes of some kinds of transactions, standards are different for residential buyers and income property investors. But the ATR/QRM guidelines apply equally to all borrowers intending to buy residential properties of up to four units. That includes investors who plan to use those properties for rentals.

The provisions of the ATR/QM rules create both protections and problems for lenders. Loans that conform to the new rules can give “safe harbor” to lenders, protecting them from legal actions if the loan should fail. But they also impose more layers of processing and verification, which makes some lenders, especially smaller institutions, reluctant to service small money loans.

The ATR/QM rules are intended to prevent marginal borrowers from getting a loan they can’t repay, which ultimately leads to defaulting and foreclosure. But because fewer borrowers can meet these new standards, fewer mortgages are processed – and fewer home sales follow. Coupled with an actual shortage of homes to be bought in some areas and a general decline in Americans’ interest in home ownership overall, the new standards add some significant speed bumps to the road to recovery.

Here’s what you need to know about the ATR/QM rules for mortgages on residential properties. The key criterion for qualifying (that is, penalty-exempt) residential mortgages is the Ability to Repay – the major reason that so many mortgages failed in 2009. Creditors must now be able to demonstrate that mortgage applicants demonstrate an ability to repay the loan over time.

That means applicants must have a debt to income ratio of no more than 43% and meet specific standards for creditworthiness and initial down payment. Down payment thresholds vary, depending on lenders. Government backed lenders such as the FHA and quasi government entities such as Fannie Mae and Freddie Mac may require a down payment of as little as 3%, down from the QM’s original standard of 20%.

Lenders, too, have to meet a series of new standards to demonstrate that they’re in compliance with ATR/QM Rules. Determining a borrower’s ability to repay leads the list. They also have to demonstrate that the loan doesn’t involve balloon payments and interest only payments. Although they’re allowed some slack if a borrower who looks loan-worthy later falls into a financial crisis and can’t repay the loan, lenders are safe from legal action only of ATR standards are met before the loan is processed.

Lenders can make higher priced and riskier loans, too – but they aren’t protected from prosecution and penalties if those loans go bad. That creates pressure on lenders to deny marginal borrowers, and for borrowers to opt out of the process.

The new rules may be aimed at protecting the housing market from itself – and that’s a double-edged sword. Bit for those who do qualify, interest rates are still relatively low and for those willing to diversify into multiple markets as Jason Hartman advices, it’s still a good time to invest in rental real estate. (Featured image:Flickr/,ilehighmanagement)
Read more from jason Hartman: