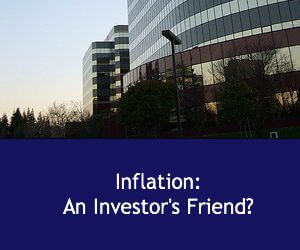 The specter of inflation strikes chills into the hearths of many consumers – even more than its cousin, deflation. But not all inflation is created equal – and for both the economy at large and for income property investors, some inflation can be a very good thing indeed.

Consumers fear inflation because to them it means higher prices for the goods they buy every day. In oth4er words, the dollar doesn’t go as far as it once did. And most people don’t give much thought to inflation’s opposite number, deflation, which economists and financial experts consider far worse.

Inflation is measured a number of different ways. The Consumer Price Index tracks how much it costs in a given period to buy a specific amount of tangible goods. Those figures are expressed in two different kinds of inflation – headline and core.

Headline inflation is the kind most of us worry about – the rate of inflation in prices for all kinds of goods, both those with relatively fixed prices such as clothing and “volatile” goods like energy and food, whose prices can change considerably due to a variety of shifting factors.

Core inflation, on the other hand, measures the costs of stable goods only. It doesn’t take into account the prices of those volatile goods, and some economists consider it a more accurate representation of actual inflation. Others argue that since core inflation numbers exclude food and fuel, those stats give a skewed impression of that actual inflation that hits American consumers and drives monetary policy.

There are other models for tracking inflation, too, and some financial experts are calling for more investment into using them. But these models only chart how much inflation is affecting consumer buying power and business prosperity. They don’t reveal the effects of inflation on individuals and the economy – or what to do about it.

Inflation has a variety of causes. According to a recent Business Insider article on the history of inflation for over a century, the US economy underwent cycles of severe inflation after the two World Wars, and has gone through a number of milder cycles of inflation and deflation since then. Severe deflation led to the Great Depression of the thirties and is associated with other tough economic times over the years.

That’s why the Federal Reserve has decided that a little inflation is better for the economy than none at all. And though it may seem like callous disregard for the every day consumer, the Fed aims to keep the economy in a slight state of inflation – ideally, around two percent a year.

That rate, as the Fed sees it, is just enough to keep prices and wages relatively high and prevent a slide into deflation and ultimately recession as prices fall and so do wages in the dreaded deflationary spiral.  To do this, the Fed sets federal fund rates, the rates for bank-to-bank lending. While that doesn’t impact consumers directly, its effects trickle down in the form of rates for long-term loans – such as mortgages.

If some inflation benefits the economy as whole, it can also be a boon for investors in income property, since real estate can be a hedge against inflation. Rising prices can increase the real value of property over time, and that means higher resale values.

A positive inflation model assumes higher wages along with higher prices, so investors in rental real estate can charge higher rents. But the most significant benefit of inflation for investors is the lower “cost” of a mortgage.

If you purchase an investment property with a long term fixed rate mortgage, as Jason Hartman recommends, your mortgage payment will stay the same, but it takes less of a bite over time. Higher prices and higher rents make it easier for those rents to cover mortgage payments, and the real value of the debt goes down. That’s another reason to leverage the power of a mortgage for building wealth in rental real estate.

However it’s measured, inflation is a part of the financial landscape. But for income property investors and the economy as a whole, a little inflation may not be a dangerous thing. (Featured image:Flickr/rieh)

CW509: Jason and Joyce Discuss the US and China Economy

Where Are the First Time Home Buyers?