Where Are The First Time Home Buyers? 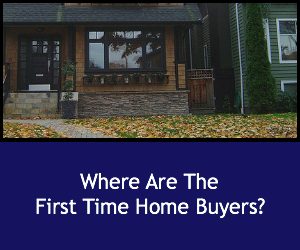 The recovery from the much publicized housing crash of a few years ago may be hitting a wall, thanks to declining numbers of a group that’s essential to a robust housing market: first time home buyers.

Although the US housing market continues to show encouraging signs of emerging from the rubble of the 2008 collapse, its long term recovery depends on those first time buyers, who inject new life into the market not just by purchasing new and resale homes, but also by spending money after the purchase on a variety of consumer goods and services. Otherwise, the home buying and selling cycle becomes a closed loop that depends on existing homeowners making the move to sell their houses – and that’s slowing down too.

Overall, the number of US homeowners is at its lowest level in over two decades. And according to new figures reported by Business Insider, the number of first time buyers stands at just 29 percent, down from 40 percent in 1980. Although real estate professionals and market watchers cite a number of factors keeping people from buying their first home, the main reasons are both simple and hard to address: availability and affordability.

One sigh of a recovering housing market is the demand for homes to purchase, and in many areas of the country, demand is outstripping the inventory of available homes for purchase. That’s one reason for the steady rise in home prices – another sign of recovery.

But the scarcity of homes for purchase, along with those rising prices, mean that first time buyers can’t find homes that they can afford. The shortfall in available housing has its roots in the wave of foreclosures that followed the housing crash, which pushed millions of homeowners into foreclosure.

As those foreclosure proceedings crawled through the courts and financial institutions, the properties involved stayed off the market. The “foreclosure pipeline” cleared in fits and starts over the next few years, with some periods of higher inventory followed by shortfall.

The problem was complicated by the efforts of mortgage servicers and brokers holding title to those foreclosed properties. After the crash, institutions including government mortgage giant Fannie Mae and major banks auctioned off their foreclosure holdings quickly in batches to large domestic and foreign investment companies, which used them as rentals.

Those sales kept thousands of homes out of the hands of residential buyers as well as individual investors. What’s more, increasing numbers of existing homeowners, who might in past years have followed the typical pattern of buying a starter home and moving up to a bigger house as careers and finances matured, are opting to stay put.

These homeowners are choosing not to sell for a variety of reasons. Rising home prices may mean that a seller could lose money on a sale, thanks to changes in capital gains taxes and trends in home values. And current low interest rates make refinancing and holding onto an existing home a more attractive option than buying another one.

For those reasons, there’s a short supply of the lower priced starter homes most first time buyers can afford in the areas where they want to live.

Most first time buyers are younger, with a median age of around 30. They’re largely members of that cash strapped millennial generation that’s burdened with student debt and unsure about their employment future. They’re reluctant to take on the commitment of a mortgage and a permanent residence – and they’re putting off life steps like marriage and family.

For many, there are other hurdles too. Even though mortgage lending standards have loosened to encourage more first time buying, for those with heavy debt and uncertain finances, qualifying for a loan may be hard. And even if it’s possible to qualify, making that down payment requires resources they simply don’t have.

Another factor is location. Lower cost housing tends to be in less desirable areas, far from the city centers where work and social life take place – and potential home buyers may not want to take on long, expensive commutes in order to own a home.

The obstacles facing first time homebuyers aren’t limited to residential buyers. They also affect solo investors hoping to get started in income property investing. Equalizing access to housing and opening up more home for purchase may be a long term effort, but for now, the shortage of available homes to buy may keep the rental markets humming – and that’s good news for investors willing to diversify their holdings in multiple markets, the way Jason Hartman advises. (Featured image:Flickr/prnwa)