Who Benefited Most From QE3? 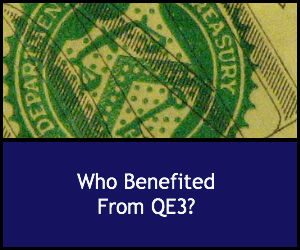 The official end of the Federal Reserve’s third round of Quantitative Easing came in October 2014, and as the dust settles, financial experts are still debating just who benefited the most from that massive economic boost – and it may not have been US consumers.

It’s well known that the “housing bubble” that saw masses of mortgages granted to marginal buyers burst in 2008. The collapse came as a result of wave upon wave of foreclosures and defaults by unprepared and unqualified mortgage holders – and it sent the entire economy into a recession.

To jump start the recovery and get the more money circulating, the Federal Reserve began cycles of “quantitative easing” – a strategy to keep interest rates low and encourage borrowing by buying up mortgage backed securities and other bonds. That, the Fed reasoned, would help banks keep rates low and boost consumer confidence.

The third round of quantitative easing, dubbed QE3, began in 2012. It was a massive undertaking, historic in its scope, that called for the Fed to buy up $85 billion in mortgage-backed securities and other bonds every month, with no clear end in sight. The plan would, they expected, keep interest rates at or near record low levels and encourage people to buy homes and other major items.

In that respect, QE3 seems to have worked. Housing sales began to recover, along with new home construction. In all, the stimulus turned out to be the biggest monetary intervention of its kind in US history. It inspired imitators in other parts of the world, too, particularly the European Union, which unveiled plans to adopt a quantitative easing maneuver of its own in early 2015 to pump more Euros into circulation.

Throughout the early months of 2014 the Fed began to suggest that it might be ready to taper off the stimulus as long as sectors like employment and housing continued to show growth. And taper it did – shaving off $10 billion a month from its buyup budget until the plan officially came to and end in October.

Economists and financial experts had worried since QE3’s earliest days that ending such an audacious plan would have serious consequences: interest rates would skyrocket in a rebound effect once the artificial controls were removed, and housing would stall as mortgages became costlier, with ripple effects throughout every other area of the economy.

That didn’t happen. Rates rose slightly, and the chill on mortgage lending that followed the collapse was partially due to tighter regulations on lending that made it harder to qualify for a mortgage in the first place. But while the economy as a whole may have benefited from the shot in the arm QE3 provided, some financial experts have pointed out that the program’s biggest impact was felt on the side of financial institutions and stock trading, not on that of consumers.

As QE3 was rolling out in 2012, financial experts including the online investing adviser The Motley Fool were warning that most of the benefits from the stimulus would be gained by banks, not their customers. Financial institutions, they argued, were getting a boost from the bond buy up, but those benefits weren’t being passed on to their customers, who were still being charged high fees for loan products.

According to Wien, the Fed’s funds account for nearly $3 trillion of the overall $13 billion in gains posted by the stock markets between 2009 and 2014. And once again, market watchers worry about what will happen once the Fed’s: easy money” is no longer a factor.

While no major boats have been rocked just yet, Wien and others expect that the stock market and other investment activities may be headed for some “correction” in the coming months, though no major crash is at hand.

QE3 ended with no major repercussions and some significant gains. But the connections between QE# money, the banking industry and US stock trading continue to raise questions about where that historic plan made its greatest impale. (Featured image;Flickr/squeakymarmot)

CW524: Jason and Fernando Answer A Couple of FAQs About Real Estate Investing