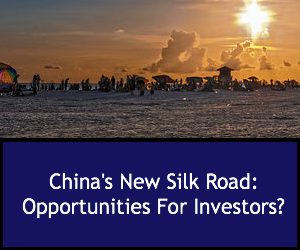 China’s fabled Silk Road, that ancient trade route that brought Asian riches to hungry European cities, is getting new leas on life, thanks to a recent initiative by the Chinese government. And while the New Silk Road project has the US and some of its allies worried, the ambitious plan to link Asia, Europe and Africa may mean new opportunities for investors from all over the world.

China’s bid for economic dominance isn’t new. Chinese investing in foreign countries is at an all time high, and rumors swirl in international currency trading about China’s plan to dethrone the dollar as the benchmark of stable currency worldwide.

Now, the New Silk Road project has the US and India scrambling to remain major players in a region that may be dominated by China’s long term, multibillion dollar project to reestablish an economic and trading corridor that, as some say, could unite Shanghai and Berlin. The plan even includes the development of seagoing “Silk Road” corridors, dubbed the Maritime Silk Road.

To back the initiative, in 2014 China created the Asian International Infrastructure Bank, promptly seeded it with $40 million in its own funds, and began inviting membership from the global community. In less than a year, most major European countries, many in Asia and even the World Bank have signed on, with more to come as the project gathers steam.

Notably absent: the US, which actively opposed the New Silk Road project from the beginning. But a number of American allies, including Australia and New Zealand, have signed on to the AIIB, along with some NATO allies, so the US now claims it supported the plan all along.

That’s one reason why, fearing that they’d become second tier players in the region, the US floated its own trade initiative, the Trans Pacific Partnership, which it’s now actively promoting as a vehicle for uniting trading partners in Europe and Asia – even though China and Russia, both key Pacific powers, aren’t included.

Not to be outdone, India, which also fears a loss if influence in Eurasia if China’s plan goes forward, has offered up a trade proposal of its own, with plans go connect a number of countries via the Indian Ocean and Iran – and that raises tensions, since that country is under US-led sanctions.

International jockeying aside, China[s New Silk Road is ambitious enough, and long term enough, to require support from all kinds of sources. US technology and expertise is certain to be in demand for creating infrastructure and moving energy. As new trade centers are born and grow, American entrepreneurs may find unexpected new opportunities to build businesses and buy real estate in underdeveloped places all along the Road.

As a new article from Business Insider points out, the New Silk Road initiative is here to stay – and it seems a majority of countries and regions touched by the plan are on board to support it. At the same time, it remains to be seen how the US version, the TPP. will affect the balance of power in Eurasia.

The US and China are already deeply intertwined. China is now the leader in foreign investment on US soil. Its campaign to change the balance in world currency trading is well known. As the New Silk Road project goes forward, tensions are likely to rise. But an often-quoted Chinese blessing (or curse) offers this wish: may you live in interesting times. And for investors and entrepreneurs watching the world’s markets for new opportunities, these are interesting times indeed.