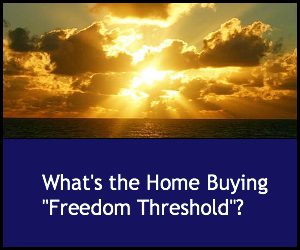 While everyone’s attention has been focused on the Millennials and their housing choices, it turns out that it may be those famous Baby Boomers who wield more influence in today’s housing market.

According to new article from the Bryan Ellis Investing Letter, research from Merrill Lynch reveals that the “magic age” for housing choices is not those post college years, but one much farther away: age 61. That’s the age when, according to Merrill lynch analysts, people really feel free to choose where they want to live. This “Freedom Threshold” comes at a time when people are able to let personal preferences and not job or family responsibilities dictate where and how they live.

That “golden age” defined by Merrill Lynch falls on the threshold of the traditional American retirement age, typically either 62 or 65. At that point, homeowners are looking ahead to a retirement that’s potentially another quarter century or more long, and they want it to be on their own terms.

The freedom to choose exactly where you want to live isn’t easily accomplished at other ages. Factors like jobs, family obligations and money drive those kinds of decisions at younger ages. For the Millennials born between the 1980s and 2000 or so, choices about housing are driven partly by choice – as a group, they tend to fear being trapped by owning a home when other parts of their lives are subject to great change. But those choices are also limited by economic necessity, such as having to relocate for work, facing limited job opportunities or struggling with student debt.

Fast forward a few years, and somewhat older individuals are making housing choices based on jobs and family. Buying a house and staying in it may not be a matter of personal preference, but of factors like proximity to well paying work, schools or other amenities. Once the nest is empty, these homeowners may feel free to make other choices, but with growing families and career demands those choices end up being postponed.

That, say the researchers at Merrill Lynch, brings us to that magic age of choice, 61. But what people do with the freedom that lies ahead is as varied as the individuals themselves. Some might opt to downsize, selling off a large family home once children are grown and gone in favor of a smaller place. Others might choose the opposite route, upsizing from a small house to a larger one that can accommodate visits from family and friends.

And still others opt out of the homeowner role entirely, choosing to rent a place that offers amenities and takes care of repairs and lawn maintenance. Moving into a mobile home, or hitting the road in an RV or living abroad for a part of the year also appeal to some.

Whatever housing choices these new retirees and near retirees make, they mean movement in the housing market – more movement than in other age groups. And since the Baby Boom generation is second only to the Millennals in size, that “magic age” for housing choices has the potential to drive significant changes in the US housing market – and create new opportunities for investors in rental real estate.

People now nearing that Freedom Threshold aren’t looking for “retirement” or “active living” communities. Only seven percent of those surveyed by Merrill Lynch wanted that kind of living arrangement. They want to live in vibrant, diverse communities close to the amenities they want, such as shopping, dining and entertainment.

Though age related services are somewhat important, such as proximity to health care and the opportunity to stay at home rather than move into assisted living facilities, that’s not as much of a priority for this age group as you might expect. They’re active, engaged and eager to enjoy life.

That’s a trend worth watching for income property investors. The choices made by those who now have the freedom to design their home life will affect the number and kind of homes available to buy as well as their prices. Those choices also open opportunities for investors who want to attract tenants of that age group to their rental properties.

While all eyes are on the Millennials, once again, the Baby Boomers are stealing the show. And investors willing to keep an eye on the changes they bring to the market can find new ways to build wealth through real estate, as Jason Hartman advises.  (Featured Image: Flickr/DionCay)

CW497: What Should We Do When the Money Bubble Pops? John Rubino Explains