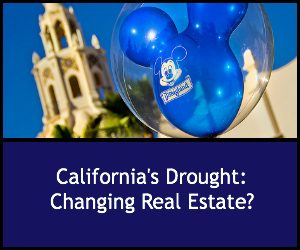 In the Gold Rush days, the slogan was “California or Bust!” But now, as the Golden State faces yet another year of its historic drought, “Leave California or Bust!” may become the new rallying cry for the people and enterprises facing a waterless future. And that, say real state experts, could change the US housing landscape forever.

The entire state of California is under drought conditions ranging from “abnormally dry” to “extraordinary drought,” which trumps even “extreme drought” in severity. The drought has been going on for so long that not even heavy rainfall has made a dent in the statewide shortfall.

If you live in greener climes, it may be tempting to dismiss the crisis as just California’s problem. It is partially self-inflicted: the state is home to over 1400 golf courses, which are draining aquifers faster than they can be replenished. The residents of Palm Springs alone use over 700 gallons of water per person per day. Fracking, Disneyland and the state’s love of water parks may be as much to blame as climate conditions.

But regardless of the causes, the effects of California’s drought ripple out into the rest of the country and the world. California is America’s little known agricultural breadbasket, responsible for providing over two-thirds of the country’s fruits and veggies, and nearly a hundred percent of its walnuts, pistachios and other nuts.

Those crops require a lot of water – nearly 5 gallons to bring a walnut to your table. Extended drought means fewer crops brought to market and at much higher prices, with shortages of staples like lettuce and tomatoes in some markets around the country.

And if major businesses and industries leave California, their workers will follow. Some real estate and environmental experts are predicting mass migrations out of California, not just by corporate entities but individuals too, driven by persistent shortages and skyrocketing water prices.

That, some fear, could trigger a real estate collapse in the Golden State that would affect housing prices and demand at all points of the spectrum, from low end inland communities to high priced luxury homes in places like the Bay area, Bel Air and Palm Springs.

Drought conditions driving people out of the state are likely to discourage new residents from moving in. Property values could plummet, even in the priciest markets. Some market watchers predict a massive wave of mortgage defaults and foreclosures similar to the situation that triggered the last big housing collapse back in 2008. California’s economy could crash, with repercussions not just for the state but also for the US economy as a whole, given the state’s high population and concentration of large corporations.

Crisis for some can mean opportunity for others. The Western states near California might not reap much benefit from a large-scale migration out of California, though. Those states – Arizona, New Mexico and Nevada in particular – have their own water problems to face, and they may face a fate similar to California’s in the not too distant future.

But California’s troubles could breathe new life into smaller markets in the South, East and Midwest as its businesses and residents shift eastward. As a recent article from The Natural News points out, California could lose up to two thirds of its population as its supply of sustainable water shrinks.

That could create both a housing crunch and a housing boom in other areas of the country, as limited supply meets increased demand. There’s already a shortage of available housing for purchase in some areas of the country, and prices are rising, making some real estate experts worry about the formation of another housing bubble that could collapse at some near future date.

The ‘California effect” could complicate that scenario as new migrants create more competition for available properties. But for investors who take Jason Hartman’s advice to diversify holdings in as many markets as possible, the coming demand could create new opportunities in the form of a bigger tenant pool and higher ROI on rental properties.

It’s too early to predict the actual outcomes of California’s stubborn drought. Still, savvy investors hoping to build wealth in real estate may find gold in the coming rush – away from those hills. (Featured image:Flickr/andycorey)