What’s In Your (Digital) Wallet? 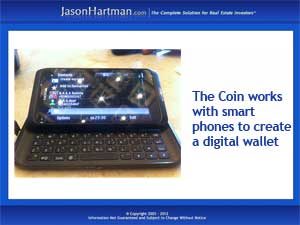 The typical wallet full of cash and a stack of cards may be a thing of the past – at least, that’s what the creators of a new digital “wallet” called Coin are hoping. But even as Coin racks up over half a million dollars in preorders, critics worry that the new device opens doors for identity theft and other risks.

The concept is simple but the technology is sophisticated. And unless you have a smartphone, Coin isn’t for you. About the size of a credit card, Coon is a digital device that can hold up to eight of a user’s credit, bank and store discount cards – all in one place. Card information is uploaded though a smartphone, and the phone notifies the user if the Coin has been lost or left behind.

According to the Coin’s founder and CEO, Kanish Parashar, the device is intended to serve as a bridge between the old system of physical currency and a totally digital system of conducting transactions both online and off line. And, since smartphones already fill so many functions in users’ lives, why not complete the circle?

But concerns remain about the safety and security of this kind of device. Since the Coin collects all of a user’s card data into one place, that could create even greeter risks for identity theft and hacking. The Coin is small enough that it could be easily lost, too. And because it’s connected to a user’s smartphone, what happens if the phone fails?

And then there’s the question of whether banks and retailers will accept the Coin. While some retailers and financial institutions are welcoming the device as just another way to conduct business as usual, others worry about the security of a device that lacks a user’s signature or photograph.

In a recent interview with The Daily Ticker, Parashar has an answer for all the objections. The Coin is actually safer than a typical credit card, he says, because it locks if it’s left behind. What’s more, the Coin allows only its owner to add more cards and it has both PIN projection and encryption security. And if a user’s phone fails, there’s an override to manually get access to the device.

The Coin isn’t cheap. It will eventually retail for around $100, though it can be preordered for half that now. And while it’s being enthusiastically embrace by a relatively small but affluent tech-loving audience, it may not make many inroads into the larger population of folks who don’t use smartphones, worry about identity theft, and prefer to keep their wallet just as it is.

Still, the Coin represents another way to bridge the gap between the physical and digital worlds, and make offline transactions as instantaneous and convenient as online ones. And it’s too new to gauge the risks involved. But as Jason Hartman says, it’s wise to learn all you can and stay skeptical – and that can keep your wallet healthy, whatever form it’s in.  (Top image:Flickr/denharsh)