The US: The Once and Future Superpower? 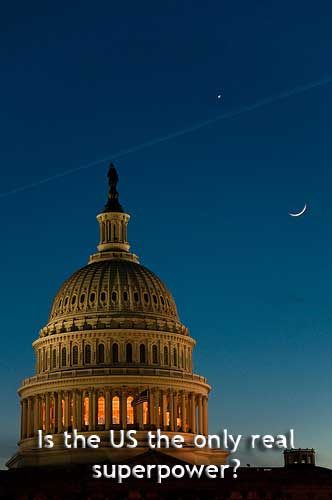 A devalued dollar, a struggling economy and allegations of spying at home and abroad . . .is the US on the ropes, beaten in the struggle for superpowerdom by booming upstarts like China and India?

Not likely, according to a recently updated article from The Futurist, which claims that by several key benchmarks the United States will still be standing as the world’s only true superpower in twenty years. That’s good news for real estate investors and entrepreneurs pondering decisions for the future.

What makes a superpower anyway? The term crept into public awareness during the Cold War, when the US and Soviet Union were vying for world supremacy in terms of military reach, innovation, economic strength and cultural clout, among other factors. The US won many of these, especially that cultural clout thing. And, as The Futurist points out, it’s likely to keep on winning – at least in the ways that really matter.

With the disintegration of the Soviet Union, the major contenders for superpower status are China and India, and China leads. It ‘s a large country with a fast growing economy and masses of investments abroad. But by the other standards – military might and cultural reach – it, like other wannabes, falls far behind.

Although China spends extensively on its military, at this point no country other than the US has the means to conduct multiple wars with such a small percentage of the country’s GDP. The US military is able to conduct its own operations, engage in cooperative maneuvers with other countries and even step up for peacetime crises at home and abroad. China’s military, for example, has neither that kind of reach nor that flexibility.

The dollar may have taken a beating in recent months in the world markets, but it’s still the most sought after currency in the world, universally recognized and traded on legitimate and black markets around the world. The dollar is so entrenched as the global go-to currency that it would take years for the yuan or rupee to achieve the same kind of reach and influence.

But it’s on the cultural front that America’s superpower status is assured. American brands like McDonalds and Nike are recognized – and sought after everywhere in the world. To the dismay of local culture aficionados, American film, television and music have global reach. More than that, the US is the incubator for significant scientific research – and its educational institutions draw students from everywhere in the world, who use it as a springboard for making changes in their home countries. Even the most prestigious universities in China, for example, have little or no recognition outside the country.

As part of a global economy, the US certainly isn’t immune to the ups and downs o he marketplace. But as the saying goes, reports of its demise are greatly exaggerated. That’s why US real estate investing is still the best option for building wealth that lasts – as Jason Hartman always says. (Top image:Flickr/eneas)