There’s Gold in That Heat Wave – For Some 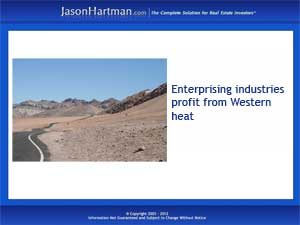 Natural disasters like tornadoes and earthquakes hit the news fairly often, followed by promises of help for the afflicted areas. The wave of extreme heat that’s sent temperatures in the Western US soaring to recorded levels in the last week of June 2013 probably won’t be included – although it’s costing millions of dollars in as many as five states. But there’s a sunny economic side to the heat too, as people from around the world flock to, not away from, the blazing temperatures.

The snowbird phenomenon has long been a part of the lore of Western cities, where affluent retires from cold northern states flock to these warmer climes for the balmy winter months. These part time residents –aka snowbirds — are usually gone by April or May, leaving behind second homes that might be rented out to short term summer tenants or just left vacant for a few months. But the heat wave has created a kind of reverse snowbird, as people fascinated with the heat boost up the travel, tourism and real estate industries in various hot cities around the West.

Although permanent residents are sweltering in their homes and travel becomes iffy when roads buckle and asphalt melts, hotel and bed and breakfast owners in places like Death Valley and the Coachella Valley of California are reporting a surge in tourism. It seems that people from around the world are actively scheduling vacations in Death Valley for June, in order to experience those extreme temperatures, however briefly. That means air travel is experiencing a bump – although some airlines ground their plumes when temperatures on the tarmac approach 120 degrees.

Tourists aren’t the only ones headed into, instead of away from, the heat. Since the heat wave attracted not just national but also international attention, the hottest places are now hosting news crews and reporters who can be filmed on the desert sands describing what it’s like to be out in midday temperatures reaching 130 degrees or more. Short-term rentals and vacation lodgings such as guest ranches and bed and breakfasts are also filling up in Western markets such as Phoenix and Las Vegas.

Homeowners in areas baking under the severe heat can expect extra expenses in terms of energy, summarizing upgrades and repairs to heat stressed houses. If you own property in an area hit by wildfires, more extreme repairs and even complete rebuilding might be in order. Travel may be more difficult and costly. But even so, creative investors following Jason Hartman’s methods for building wealth in real estate may be able to boost their fortunes by catering to that special crowd of heat-seekers willing to pay the price for a day in Death Valley in June.  (Top image: Flickr/StrangeOnes)