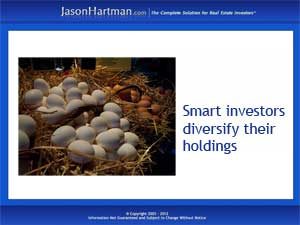 Celebrity chef Paula Deen’s very public fall from grace has hit the news in many ways. From outrage among foodies to concerns about the financial fallout as company after company has dumped her, the collapse of Deen’s empire has rippled throughout the economy. Although this southern lady with the racist mouth doesn’t seem at first glance to have much to do with real estate, the whole mess offers a key lesson for investors.

The list of corporations and projects that hitched their wagons to Deen’s star reads like a who’s who of American retail. Companies like Target and JC Penney made her the face of whole product lines and promotions, with tie ins to Deen’s shows and magazines. Now, as these companies scramble for damage control, lines such as Target’s Deen-endorsed cookware are being pulled from stores, advertising bearing her likeness is yanked from stores, and investors are running scared.   Deen’s hotly anticipated book deal has also tanked, scotching thousands of dollars in pre-orders and a massive publicity campaign by major publishing house Ballantine Books.

So what went wrong for Target, Wal-Mart and company in this situation and what’s the takeaway for income property investors? DEen’s sponsors banked big — and exclusively — on her popularity. They named products lines for her, featured her in their advertising, used her name and likeness to promote everything from books to silverware. But when her public persona went wrong, these companies lost billions. Putting massive resources behind a single personality created a house of cards that collapsed in the blink of an n-word.

And for investors? Just like Deen’s sponsors, who poured massive amounts of advertising dollars into a single celebrity spokesperson, an investor who pours all available resources into one market risks losing big if the market collapses.

Jason Hartman sums it up in his 10 Commandments of Successful Investing. “Thou shalt diversify,” says Commandment 6. Investing in several different markets with different features not only reduces risk, but also maximizes returns. An investor who puts all resources into a single market that then collapses can face major losses.

Along with that, Jason’s 7th Commandment advises investors, “Thou shalt be an Area Agnostic,” and choose to work with advisors without any bias toward a particular area or type of investment. This avoids a conflict of interest and opens the door to more opportunities for investing profits.

The disgraced food diva’s future is unclear, and it’s anyone’s guess whether she’s learned any lessons from the loss of her reputation. But for the companies who lost millions in revenue and time spent repairing damage done to images and brands, the message is clear. All eggs can be broken when a single basket falls. (Top image: Flickr/jrolandlee)