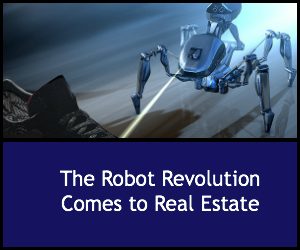 Experts predict that by 2015, robots and other kinds of artificial intelligences and smart machines will claim one third of the jobs held by humans. The coming of the Second Machine Age concerns some economists and financial planners, who worry about the impact of that kind of job loss in economies driven by the need to create new jobs.

But for investors in rental real estate, the coming advances in robotics and AI technologies could open promising new doors for building wealth from income properties.

As a recent article from Business Insider reports, within a decade robots and artificial intelligences are expected to reach the level of human intelligence – and that means they’ll be more capable than ever of taking over human jobs that require thinking and decision making skills, not just muscle.

Technology has been stealing jobs from humans for centuries. The First Machine Age, ushered in by the Industrial Revolution, brought machines that could work longer and harder than any human – or animal – could. Those machines revolutionized fields like transportation, construction and mining.

In the First Machine Age, jobs lost to machinery were lost forever. Economists worry that may happen in the coming years as well, as AI and robotics render jobs in many professions completely obsolete. But the new tech also promises to create new ones, especially in areas like design, development and maintenance of these non-human workers, and in training displaced workers to use them.

The implications of the Second Machine Age have the potential to affect just about every sector of the world’s economies. Although medicine, defense and retail lead the way in their uses of robotic technology, the new technologies are already making big changes in the world of real estate – with many more to come.

We’ve reported here before about some effects of AI technology on real estate. Mobile technology and a variety of apps could spell the end for a variety of real estate related jobs, as buyers and sellers can connect independently anywhere on the planet and conclude their transactions without ever meeting face to face.

And virtual reality and gaming technology has also changed the way people shop for houses, with customized virtual tours of online homes and customizable preferences for a home’s look and feel.

But it’s advances in the use of robots to assist the elderly and disabled that could push major change in real estate. As a recent article from Robotenomics points out, robots are big business in eldercare, especially in countries like Japan, where they’re becoming indispensable as companions and monitors for older people and those with disabilities.

The presence of a constant, tireless robot companion capable of dispensing medications, tracking health conditions and contacting help when needed could make it possible for more people to live on their own in the community rather than in assisted living facilities or retirement enclaves.

And if so, that means more people needing user friendly housing to rent, with features that include accessibility to services and accommodations for disabilities. The robot revolution comes at a time when changing demographics, cultural shifts and new economic realities are converging to create a very different housing landscape skewed toward renters, not buyers, for the next decade and beyond.

Where Are The First Time Home Buyers?