The dangers of China’s economic downfall 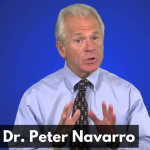 In episode 623, Jason Hartman is joined by Dr. Peter Navarro, professor of Economics and Public Policy at the Paul Merage School of Business, University of California, Irvine and holds a Ph.D. in Economics from Harvard University. He is the author of Crouching Tiger, What China’s Militarism Means for the World.

Jason opens the show by thanking the listeners of Dubai for reaching out to offer help with the Venture Alliance Mastermind Group’s next trip that’s coming up soon. The group does something four times a year, and those interested can learn more by visiting venturealliancemastermind.com.

Saudi Arabia is snapping up US farmland

There’s a new, big real estate investor on the scene. According to a Newser story, Saudi Arabia is snapping up US farmland in the southwestern states, including Arizona and California. The Saudi’s are realizing that oil is not a long term business, and they’re making hay while the sun shines. The Saudi Gazette reports that the Saudi’s have purchased 1,790 acres of farmland in Blythe, CA to grow alfalfa hay and save water in their homeland. The local farmers are upset because they’re saying the water isn’t free and they aren’t getting free oil.

Business Insider reported on what to expect to pay in rental in 10 major US cities.

Jason said he assumed the data was based on high-end complexes, and listed some of the markets for two-bedroom apartments.

It’s not a very good deal to be a renter in Atlanta or Houston because the rent-to- value ratio is not in favor of the renter. One of Jason’s favorite screening tools for a property is that it should have at least a one percent RVR.

Dr. Navarro is the author of Crouching Tiger, What China’s Militarism Means for the World. Jason kicked off the discussion by asking why China would ever want to hurt it’s best customer—the US.

The answer goes back to imperial Japan and the whole notion of China and Asia wanting to control the markets and resources there, and over time the US has begun to get in its way. If you look very carefully at what China is doing militarily and what it is actually saying, its acting much like Vladimir Putin is in Eastern Europe, the Baltics and the Ukraine; Putin is asserting historical based claims to those territories and using his military to advance those claims that’s led to economic sanctions and conflicts in that region of the world with America. China is doing exactly the same thing. China claims 80 percent of the South China Sea, with is one-third of all global shipping, and also claims the energy province of Taiwan. It doesn’t want conflict but is prepared to advance its territory claim and hopes ultimately that it could build a military large enough and strong enough that the US will simply go away.

Jason found it to be an impossible idea because if the US was to whiter away or be destroyed the Chinese economy would be in shambles.

For 5,000 years, China had the most powerful economy and nation in the world and now its looking to restore that. Dr. Navarro said the US has had the most powerful military in the world, but in the past 15 years since China’s entered the US market, the US has shut down over 70,000 factories, over 10 million are unemployed, and our GNP has shrunk from a historical level, and all of that has come at America’s expense. In contrast, China has become the world’s factory floor, and they have the ability to churn out the weapon’s systems as the US stops building things. From China’s point of view, Asia is 70 percent of the future growth of the world.

The geopolitical risks in Asia

Dr. Navarro said his book is a detective story for the readers to figure out what China’s intention are. If China has bad intentions, financial advisors have got to ask the question: what happens if China puts Japan under fire. Jason asked if the US would be able to stay out of a China/Japan conflict.

The US has the longest running defense treaty with Japan of any in history. We have pledged to have their back, so if China attacks Japan we have said we’d come to their defense. If the US were to abandon Japan, it would allow China to control more of the economic growth.

What can Creative Wealth listeners do?

Dr. Navarro said Creative Wealth listeners should learn about the risks involved and don’t get caught by surprised. He suggested a push presidential candidates to address foreign policy and economics. Why aren’t there questions about China during the presidential debates? Dr. Navarro asked. There’s no magic bullet, but America needs a president who recognizes the totality of what we need to do to become the strongest nation in the world as we once were.

Jason asked if Japan’s debt crisis comes into play. Japan is an island nation with no natural resources and doesn’t have any land to develop housing, roads and highways. Historically, Japan has run it’s growth by exporting, but Dr. Navarro said that show is over and it’s unlikely there will be a resurgence of Japan’s economy. China is chocking them economically and has tremendous pressure over Japan. When push comes to shove, Japan would rather go to war because of their historical pride.

China’s not a good place to invest

Dr. Navarro said the China economic miracle is over. He said Brazil, Australia, and Canada are better investments. Jason said he believes China has huge problems, demographically and economically. Dr. Navarro said these are the reasons it’s going to be dangerous over the next 10-15 years.

Dr. Navarro said listeners can visit Crouchingtiher.net for more information about China/US relations, and his book his also available on his website.

Why Buying Belize Real Estate is STILL a Bad Idea

Adam Taggart, PROSPER! How to prepare for the Future & Create a World Worth Inheriting.