Why Buying Belize Real Estate is STILL a Bad Idea 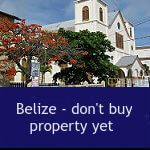 The idea of buying real estate in Belize or any of the other handful of Central American countries might be a hard one to shake for American investors. It’s exciting, exotic, romantic, and lot of other adjectives. The question Jason Hartman would like answered first is whether or not it’s a profitable investment? For episode #306 of The Creating Wealth Show, Jason sits down (literally) on the beach in Belize to pick the brain of Mike Cobb, local real estate expert.

Jason admits it. He himself has frequently fallen prey to the desire to own international property. The balmy beaches, statuesque mountains, and low cost of living in Central America are like the siren’s call to Homer sailing past in Greek mythology. But Jason is well aware that it would be easy to encounter financial disaster on those rocky shores.

As with any other property, he applies the 10 Commandments of Successful Investing first. Thus far he hasn’t found a reason, from a cash flow perspective, to support buying in Belize. One of the main problems is that the overwhelming demand is for vacation rentals with length of time varying from a few days stay to a month. Smart income property investors want a single renter in place the entire year, not a parade of tourists or snow birds.

Setting the Scene in Central America

Cobb listed the handful of countries that make up Central America: Costa Rica, Panama, Belize, Nicaragua, Honduras, El Salvador, and Guatemala. Not all are created equal when it comes to popularity, though. Guatemala, El Salvador, Nicaragua, and Honduras rank at the low end of what he refers to as the “popularity curve.” Panama, Costa Rica, and Belize rank higher in the eyes of North American visitors thanks to a more well-developed infrastructure that allows for the amenities we in the western world have come to view as necessary.

A comparison might be made to America in the early to middle part of the 20th century, back when the midwest and west were still “under construction” when it came to highways, gas stations, hotels, and other developments that make it easier to travel around.

While Jason pointed out that he had yet to find a property in Belize that met all his criteria for investment, Mike responded that there are two different kinds of real estate investors. The first, like Jason, want any property they buy to cash flow positive from day one. Alternatively, some investors are looking for appreciation, which requires buying at the lowest price possible and hoping the value goes up.

For appreciation, Nicaragua and Honduras, as immature property markets, offer the best prices around. The trouble is you don’t know if prices will spike upwards in a month, year, decade, or ever. Historically, political unrest has made parts of Central America appear sketchy to many Americans.

Even though Jason is a fan of appreciation as much as any real estate investor, he considers it the “icing on the cake,” a fringe benefit that everyone likes but which pales in comparison to the value of a positive cash flow property held for a long time. He recounted to Mike the many times he has been pitched real estate deals by developers in Costa Rica and Belize but none have shown him a renter-based business model based on long-term tenant cash flow.

Does Investing in Belize EVER Make Sense?

There are a few situations where buying a property in Belize might make sense. If you want to relocate to the area and need a place to live, of course buying makes sense. You also might consider the purchase option if you plan to spend time in the country frequently and can rent it out during vacant stretches to offset mortgage costs.

In both cases, avoid the urge to make a quick buy, no matter how good the deal seems. There is always another deal. That’s important enough to say twice. There is ALWAYS another deal. The secret to finding the best deal possible is to not get in a hurry. Cobb suggests you spend time in the country over multiple visits. Get to know the people and the area. Like anywhere in the world, let word-of-mouth be your guide.

You just think people have trouble with the construction industry in the United States. Wait until you get a load of what passes for regulation in places like Belize. Maybe the property you’re interested in buying was formerly a swamp and the construction company filled it with cheap gravel. Think the thing might sink two feet into the muck a few years down the road? Without the government oversight we’re used to in the developed world, no one is required to tell you anything about the history of the site your potential property sits on. This is why you need to visit, talk to locals, gain their trust, and then get the scoop.

Everyone Hates the Condo Association, Right?

Often derided as a blight on humanity in the United States, you might have to wrap your mind around the idea that, in Central America, the condo association could be your best friend. Think of it as a private government that exerts at least some interest in protecting the value of your property.

The actual government in places like Belize doesn’t spend time worrying about whether you get a fair shake in your real estate purchase and even less time passing regulations to that effect.

In Central America, real estate agents do not need a license. Nor do property managers, developers, construction companies – you get the idea. It is entirely incumbent on the buyer to do his or her due diligence and always beware!

Has the Time Passed to Find a Good Deal in Costa Rica?

It’s been more than two decades since Costa Rica appeared on the radar of American ex-pats. Surely all the good property deals are gone. Cobb thinks we’re still in the early opportunity phase. With 10,000 Baby Boomers retiring daily, expect 4 to 5 million people looking to find a property in paradise. The ex-pat population in Costa Rica could triple in the next decade.

After all, what’s not to like about it? Low cost of living, natural beauty, and $2,000 a month in passive income puts you into a life of luxury in a place like Nicaragua.

And how do you reach that $2,000 in passive income? Investing in single family residential homes and renting them out (in America, of course) is a good start. (Image: Flickr | Bernt Rostad)

Better to buy multiple properties at once?