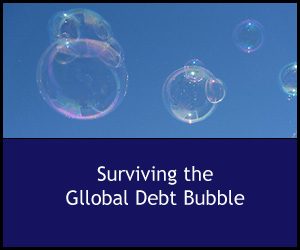 Is the world headed for a debt crisis of historic proportions? The world’s central banks are creating conditions for a global debt bubble that’s doomed to burst, according to economist Harry Dent, who joins host Jason Hartman on a recent episode of the Creating Wealth Show to talk about his predictions for the economic future of the US and the world.

Dent specializes in economic demography, or the study of the role demographics can play in shaping economic trends. Appearing on Episode 545 of Jason’s top rated investing and finance podcast, Dent, author of The Demographic Cliff and several other books on economics, examines the role of central banks in creating the world’s escalating debt problems.

The shop opens as usual with Jason’s editorial, a collection of observations about real state news and answers to listeners’ questions about investing.

Listener Daniel emails with a question about creating an entity of managing his newly acquired properties. He tells Jason that he’s just flipped a house, and he plans to use the money from that transaction to begin building a “buy and hold” portfolio of income properties.

His question: he plans to manage his acquisitions directly, without a dedicated property manager. But he doesn’t want his identity available to his tenants. He wonders if it’s appropriate to create a sole proprietorship to be the “face” of his enterprise.

Jason points out that a sole proprietorship may not be the best answer, since it isn’t an entity and it doesn’t actually protect assets. If you want to manage the property without tenants knowing you own it, a better choice is to create an LLC and give it a name as the management company.

But letting tenants know you’re the owner may not be a bad thing. Jason points out that in some cases tenants can act as property mangers of a sort too – they’re on the spot to observe problems and can arrange for repairs on their own.

Jason closes the segment with a note about his Venture Alliance Mastermind group, which offers major benefits for investors who want to make connections and find partners for new ventures in wealth building.

Economist Harry Dent is a pioneer in the field of economic demography. His observations about economic trends based on demographic data and past history have been borne out numerous times. He joins Jason to talk about the reasons for the debt crisis and what that means for real estate and the economy in general.

The world is facing a severe crisis of debt right now, says Dent – and when the bubble bursts, economies around the world will suffer. But the rapidly expanding bubble of debt is largely the fault of central banks around the world, which combat debt by the simple expedient of creating more money, rather than addressing the root cause of the problem

Dent points to fairly recent history to illustrate the dilemma. Deflation typically follows a major financial crisis – and so does depression. That’s what happened in the Great Depression of the 1930s, and it looked likely after the great housing collapse of 2008 too.

But to avoid depression, Dent says, the government chose to fight deflation with inflation. In the current crisis, that was accomplished through multiple rounds of Quantitative Easing – government initiatives to artificially get more money circulating by buying up massive amounts of mortgage backed securities. By buying these instruments from banks, the government reasoned, money could flow back to the banks and from there into the economy at large. But that was less effective than making it available directly through loans and other arrangements.

Quantitative Easing simply put more money into the system; it didn’t solve the problems that created the situation in the first place. These efforts come even as private debt in the US totals over $42 trillion.

It’s a scenario played out in countries around the world, especially in places where debt is largely managed by money on paper and no real solutions at hand. A prime example is the current crisis in Greece.

All this could lead to a harsh economic downturn if countries and governments aren’t willing to tighten their belts and rein in spending rather than putting currency band aids on the bleeding. But because that may not happen, the coming crash could affect all areas of the economy – including real estate.

Dent expects owners of high-end properties to be hardest hit, as hyper expensive properties in major cities collapse. It’s a phenomenon that impacts not just US investors, but also foreign ones – particularly the Chinese, whose economy is destined for a crash as well.

Chinese nationals who sink large amounts of money into US real estate in order to get their money out of China may be in for a shock, says Dent. That’s because the Chinese economy, which appears to be booming, is headed for a collapse, largely because the demographics are not on the government’s side.

China is the only world power without favorable demographics, and its future shows what a major factor demographic composition can be in overall economic health. China’s strict one child policy and a labor force unprepared to embrace new technology could be factors that contribute to major economic troubles down the line.

Is the US in trouble too – and is the much-publicized “recovery” real? When a bubble bursts, deflation follows – and artificially creating money isn’t the answer, Dent points out. Our reliance n those “financial drugs” could create a scenario similar to the Great Depression since the economy can’t correct itself naturally.

What’s ahead for real estate, that perennially stable asset that does well under inflation but also doesn’t do too badly under deflation? Mortgage rates could hit new lows – and that means a silver lining for investors in “everyday housing” – the staple for building wealth in rental real estate. (Featured image:Flickr/sirius10)

CW545:   Harry Dent: How to Profit From the Demographic Cliff: Central Bankers Have Gone Mad And Are Creating A Debt Bubble That Will Burst