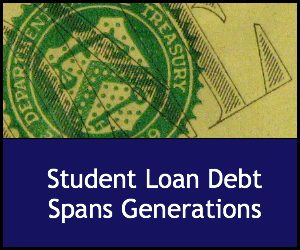 Think student loan debt is only a problem for new grads – and maybe their families? Think again. The ballooning student loan debt crisis has hit generations ranging from those new graduates to midlife professionals to retirees. And it’s those “senior citizens’ dealing with student debt who may be hit the hardest.

In late 2013, the total nationwide student loan debt topped $1 trillion. The cost of higher education of all kinds jumped by over 500 per cent in less than a decade. That includes not just traditional four-year university programs, but also community college and vocational programs and professional trainings.

It’s estimated that the average college grad leaves school with around $10,000 in student loan debt. That includes the old standby, federal student loans, as well as a variety of private lender funding and school payment plans. Though some students may find jobs that will allow them to pay their loans off in a reasonable amount of time, many are not so lucky.

The burden of student loan debt can become crushing if the student in question isn’t able to find a well paying job appropriate to the degree. The old cliché of the PhD driving a cab or working as a barista arises from painful truth. And the inabilit8y to pay off those debts impacts virtually every other aspect of the borrower’s life.

Debt burdened students may end up living with family or friends, opting not to buy houses or other big-ticket items. The preference of many recent college graduates to postpone marriage and children has been well documented – and it may be partly due to the inescapable debt load that follows them throughout their entire working lives.

There are many reasons a debt-ridden generation doesn’t participate n the consumer economy – or at least, not enough to make a significant impact on the recovery from the recent recession. And unlike other kinds of loans, you can run, but you can’t hide from student debt.

Though the public face of the student loan problem is the millennial in a cap and gown, the country’s changing demographics mean that just about anybody can end up with student debt. Americans are living longer, and the traditional stages of life just don’t apply any more.

Not only is it possible to be carrying debt at age 65 from loans taken out 40 years ago, today’s seniors mat be carrying new debt. A person who didn’t get the chance to go to school right out of high school may return for a degree at 50, 60 or beyond. A professional with an MA might pursue a PhD years later. To get a promotion, an individual might sign up for specialized training.

What’s more, parents who co-signed loans for a child in college can be held liable for those debts if the student abandons payments or dies. This kind of unexpected debt can destroy retirement plans, scuttle hopes for investing or travel – or push debtors into poverty.

Because student loans aren’t protected from bankruptcy, the government has the power to cut Social Security and disability payments in an effort to collect payment on outstanding federal student loans. And for those depending on those payouts for survival, the cut can be devastating.

The deductions are capped – they can’t reduce benefits below $750 a month. But economists point out that the limit was set back in 1999, when $750 was above the poverty line. Today, it’s not – and that leaves many people not only with no ability to repay the debt but also with no way to live comfortably either.

What does all this have to do with investing?

As the student loan problem continues to erode the financial stability of people across virtually all-demographic groups, it also affects their housing options and choices. Creditworthiness affects not just the ability to buy a home but also to rent one. Debt loads affect the amount of rent a tenant can pay. And retirees may find their income just isn’t sufficient to allow them to live where they choose or travel,

As Jason Hartman says, everybody needs a place to live, which is why investing in rental property is a stable way to build wealth. But for adults of just about all ages, the burden of student loan debt can take its toll on what that place might be.  (Featured image;Flickr/eguidetravel)

Rental Housing Could Be Running Out