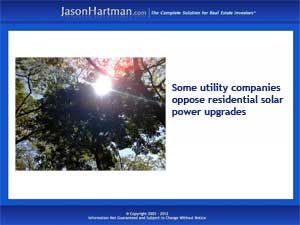 In today’s housing market, green upgrades mean better prices and quick sales, and solar adaptations lead the way in eco friendly alterations. But as incentives and credits help homeowners install rooftop solar panels, utility companies around the country are starting to feel the pinch. Now, electric companies in some solar-intensive states are fighting the spread of government and private support for alternative energy sources.

Rooftop solar panels are at the heart of the controversy. Easy to install and relatively inexpensive, they can save enough energy to allow households to run on a negative usage – and even sell energy back to the electric company. To put renewable energy into the hands of average homeowners, the government offers tax credits and rebates for installing and using solar panels, and a variety of solar panel companies also offer steep discounts and rebates.

Green upgrades like these can offer a significant boost to a property’s sale value – and, as we’ve reported in previous posts, also attract renters who value conservation and green living. Over the life of an investment, solar panels save money and resources, and qualify for a hefty tax deduction as part of the long list of breaks available to both residential and investment property owners.

Currently, according to the New York Times, rooftop solar power accounts for less than a quarter of one percent of the US power supply so the panic striking utility companies around the country is probably overblown. At this rate it would take decades of dedicated solar use by many households to make a dent in the electric companies’ hold on power sales.

Still, power company executives are ramping up their campaign to target solar panel users with new fees and penalties for installing and using rooftop solar panels. Tactics include pressuring state governments to impose new fees on customers using solar panels or to impose additional zoning and housing laws to limit their use.

The biggest fight, though, involves a system called net metering credit, which pays solar users for excess energy they can sell back to the utility company. Even though some studies have shown that the credit system ultimately saves utility companies money, the utilities in several states see this as a threat, rather than a long-term partnership with benefits for both sides.

Solar upgrades can benefit property owners, residents – and the environment. For investors using Jason Hartman’s strategies for building wealth in real estate, green upgrades can boost an investment’s value – but not if panicked utility companies have their way.  (Top image:Flickr/evgeni_dodorov)

Fannie and Freddie in the Crosshairs?